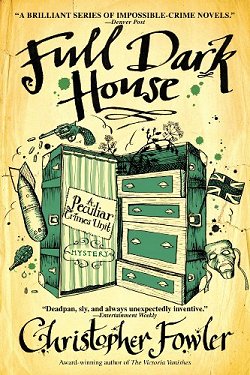 First Line: It really was a hell of a blast.

When a bomb rips through the Peculiar Crimes Unit in London and claims the life of eighty-year-old detective Arthur Bryant, his partner John May faces the end of a partnership that lasted over fifty years. Bryant's death also seems to have ties to their very first case during the Blitz in World War II. May finds his old friend's notes of that very first case and becomes convinced that the past has returned... and it has a score to settle.

The city is being bombed almost nightly, but a faceless killer is stalking London's theaters. This is a criminal who has an uncanny ability to escape detection, and it will take all of Arthur Bryant's unorthodox techniques and John May's dogged police work to catch him. But how on earth could the killer have returned after all these years?

I first tried to read Full Dark House shortly after it was published during my first trip to the UK. I think I was on sensory overload because I did not care for the book at all. But then I read White Corridor, the fifth book in the series, and it became one of my best reads last year. This encouraged me to start at the beginning again.

Full Dark House has a complex mystery that I enjoyed trying to solve, and along the way, I also learned plenty of theater lore. Another very strong point in the book was the excellent feel for life in London during the Blitz that Fowler gives us. The smell of unwashed bodies (since so many water lines had been bombed). Walking through the streets during the blackout trying not to fall in any craters. The spectral walls of blasted buildings looming in the darkness. Sewage lines being hit and emptying themselves out in the subway system. I like books that add to my knowledge of social history.

There was also the pleasure of getting to know the young Bryant and May, and of enjoying Fowler's sense of humor. Bryant and May are quite the pair, and I'm going to enjoy working my way through this series. The only thing that really didn't work all that well for me in Full Dark House was the transitions between the present-day and World War II timelines. Many's the time I found myself stopping to figure out what year it was.

Am I glad that I read this book again? Yes, I am. I'm also glad that I have quite a few left to read. I'm looking forward to a long and pleasurable association with Bryant and May.