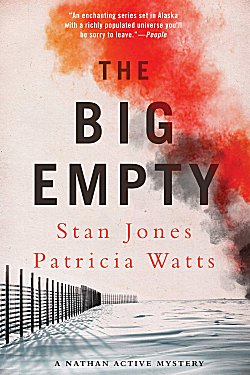 First Lines: "Son of a bitch." Nathan Active jerked upright in the Navajo's copilot seat at the sudden sound of Cowboy Decker's bush-pilot drawl in the headset.

Chukchi police chief Nathan Active's wife is having a difficult pregnancy, and he'd like nothing better than some quiet time on the job so he can focus on her needs; however, he's not going to get it. When young mother-to-be Evie Kavoonah and her fiancé Dr. Todd Brenner are killed in a plane crash in the remote Brooks Range, bush pilot Cowboy Decker is convinced that the crash was no accident-- and definitely not pilot error. He doesn't rest until he convinces Active to get in his plane to fly to the crash site to check it out.

What they find convinces Active that Decker is right. Now he's got a murder investigation, an anxious adopted daughter, and an extremely nervous pregnant wife to deal with. No rest for the weary!

Stan Jones' Nathan Active mysteries continue to be my favorite series set in Alaska-- and it's for a multitude of reasons. There's a strong cast of characters from all walks of life. There are intriguing-- and often spine-chilling-- mysteries to solve. The setting of extreme northern Alaska is often a character, and last but not least, the cultural information is fascinating. Each book comes with a short glossary at the beginning which I find extremely useful because part of learning about a culture is learning a bit about the language.

The Big Empty is 50% mystery and 50% the personal life of Nathan Active. At times I found that percentage weighing too heavily on the personal life aspect, but only because I find Nathan's wife annoying. I shouldn't. Grace Active has had horrendous things happen to her in the past, and she's finding it daunting to overcome them. Anyone would, and I applaud Jones for not only having a troubled character like Grace but for dealing with her problems honestly and with great sensitivity.

The mystery is a good one, beginning with discovering what caused the crash and then moving into whodunnit territory. I did find the killer's identity to be a bit too easy to deduce, but getting to the reveal was enjoyable.

If you're a fellow armchair traveler/sleuth who loves solving mysteries in exotic places, you should meet Nathan Active and learn about the culture of the Inupiat. I still remember one book scaring me badly when Nathan went out on the pack ice. Even though you can pick up The Big Empty and read it as a standalone, I recommend starting at the beginning with White Sky, Black Ice. You've got some mighty fine reading ahead of you.