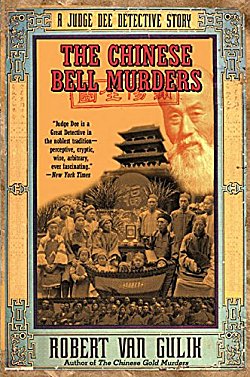 First Line: It is now six years since I withdrew from the prosperous tea firm inherited from my father, and settled down to peaceful retirement in our country villa outside the eastern city gate.

Back in the 1980s, my mother read all Robert van Gulik's Judge Dee books and loved them. I knew that, sooner or later, I would have to read at least one of them myself. Much, much later, I have finally done so, and I can see why Mom enjoyed them so much.

Three of Judge Dee's cases are covered in The Chinese Bell Murders: "Rape Murder in Half Moon Street," "The Secret Door of the Buddhist Temple," and "The Case of the Skeleton Under the Bell."

Judge Dee is often called the Sherlock Holmes of ancient China, and it's easy to see why. These cases are all about their ingenious mysteries, all about solving the puzzles. Judge Dee thinks nothing of donning disguises to get at the truth, and he is scrupulous at upholding the law, although not all of his able assistants are. I also appreciated the glimpse into the life and culture of 7th-century China.

This is a series that I feel I can come back to once in a while when I'm in the mood for a "Just the facts, ma'am" mystery. Even though I am a bone-deep character-driven reader, there is something to be said for occasionally solving a concise puzzle or two.