Benighted by J. B. Priestley 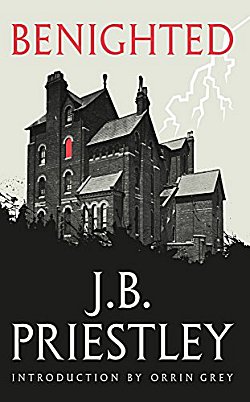 First Line: Margaret was saying something, but he couldn't hear a word.

J. B. Priestley was an extremely popular author in the late 1920s and the 1930s, and when someone told me about Benighted, I had to read it. I love stories about old, scary houses, and this book inspired a 1930s film, "The Old Dark House," which gave birth to a whole genre of movies.

Benighted is the tale of people stranded by a horrendous storm and flooding in a remote corner of Wales. Their place of refuge is an ancient, dark, creepy old manor house inhabited by four of the strangest people you'd never hope to meet. Little do they realize that it will be a severe test of their mental and physical fortitude just to survive the night.

Priestley excelled in his depiction of the ancient house and its inhabitants. There is a decided scare factor when reading about them that I enjoyed. Where the book fell flat for me was in the amount of time it spent inside each of the stranded characters' heads. I can see what Priestley was trying to do: the house had such an effect on these people that their attitudes began to change about what they wanted from their lives, but it was just too much-- especially since I didn't particularly like any of them in the first place. By book's end, there's also a question I'd dearly love to have answered, a question that Priestley really didn't want readers to ask.

Benighted gave me a glimpse of Priestley's talent, but it failed to hit the bulls-eye.