A Wrench in the Works by Kate Carlisle 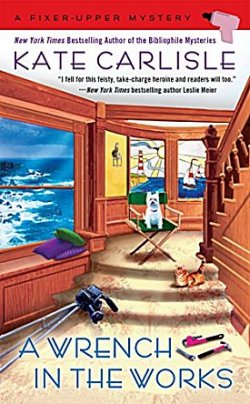 Shannon Hammer's younger sister Chloe left town after high school to make it big in Hollywood. Now she and the production crew of her hit series "Makeover Madness" are back to film several episodes of this highest rated cable TV show, and some of those episodes will feature Shannon herself.

Shannon learns almost immediately that all is not well in TV land. Chloe's executive producer, Erica, likes to fire Chloe and her co-host almost every week, and she's equally skilled in touching a match to any other incendiary situation she comes in contact with. When Erica turns up dead, Chloe and the entire crew are under suspicion, and that means Shannon has to get to work to find a killer.

In this sixth installment in Carlisle's Fixer-Upper cozy series, readers get to learn more about Shannon Hammer's younger sister, Chloe, and the reason why Chloe left Lighthouse Cove right after high school helps to fuel the mystery.

As always, I enjoyed the scenes which show Shannon working on an old house and explaining what she's doing, and Carlisle uses her newfound knowledge of how television programs are filmed to make readers feel as though they have a backstage pass allowing them to see and hear everything on set. Although I found the identity of the killer to be rather easily deduced, I enjoyed A Wrench in the Works and look forward to my next visit to Lighthouse Cove.