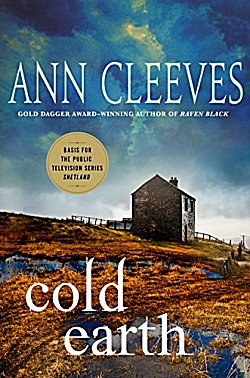 First Line: The land slipped while Jimmy Perez was standing beside the grave.

It's the dark days of winter in the Shetland Islands, and it won't stop raining. When a landslide sweeps down a hill and wrecks a house, no one worries very much because it was assumed that the building was unoccupied. When the body of a dark-haired woman is found inside, Jimmy Perez becomes obsessed with identifying her and trying to find out how she died.

I've known for a while that this series is coming to an end, and I've been torn between reading this book or saving it for when I need a read that I know is going to be good. That's how I've come to think of Ann Cleeves' writing-- as guaranteed excellence. Her books are so quiet and unassuming that readers may not realize just how tightly woven the plots are, how carefully delineated each character is, and how beautifully the landscape is described.

The mystery of the dark-haired woman takes time to tease out all the clues and make sense of them. Her identity alone drives the quiet and observant Jimmy Perez to distraction, and then there's the matter of what she was doing on Shetland to begin with as well as why someone would want her dead.

The personal lives of both Jimmy and Sandy are becoming interesting, and neither man is accustomed to thinking of a woman in his life when he's in the middle of a murder investigation. I love the omniscient point of view. By the time readers come to the end of a Cleeves novel, they've really come to know the characters because they've spent time in their heads. That points out one of the special things about this author's writing. How can readers spend so much time in the characters' heads without (1) becoming bored or (2) figuring out the identity of the killer?

Besides being on Shetland again and watching Perez solve a murder, one of the highlights of Cold Earth for me was the growth of Sandy's character. In this book, he's beginning to come into his own, and that says a lot, not only about him but of Jimmy Perez, the man who could see that this young man appeared to be slow but wasn't and took time to work with him and turn him into a first-rate police officer. It's something you don't see that often, in fiction or in real life.

If you're in the mood for tight plotting, excellent characterization, and a vivid landscape, you really need to pick up one of Ann Cleeves' Shetland Island mysteries. They are superb.