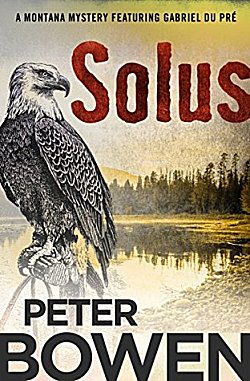 First Line: Du Pré looked at the young doctor who was looking at a file on his computer screen.

When you're a good man with a family who needs a place to hide out from the bad guys, there's no place better than Toussaint, Montana, and no better man to help you than Métis Indian and former cattle inspector Gabriel Du Pré. Du Pré already has his plate full; he has an ailing granddaughter back home from college, a meddling medicine man, and an eagle hunter from Kazakhstan keeping him busy.

Hoyt Poe was a guard at a Kabul prison and witnessed his fellow soldiers abusing the inmates. His testimony is going to expose the military contractor responsible for the prison's brutal interrogation program. That military contractor wants Poe dead, and he'll do anything to achieve his goal. How long will it be before his mercenaries find Poe and his family hiding out in Toussaint?

I've loved this series since the first book, Coyote Wind, but I do know that it is not for everyone. The main character is a Métis Indian-- a tribe descended from Canadian Indians and French trappers that moved down into Montana. He and his extended family and all their friends there in Toussaint are not politically correct. They speak in a gentle sort of dialect that shows their French roots, and it's amazing how Bowen accomplishes this using little more than well-placed commas and a few missing prepositions. These people may not behave the way we more "civilized" people want them to, but they are good people, fiercely independent, and much more willing to stand up for their principles than most of the rest of us. When Du Pré and his friends are given the task of protecting Hoyt Poe and his family, they take it very seriously indeed.

Solus is more social commentary than mystery, although readers will wonder who survives and how as they turn the pages. If you do not like politically incorrect people and if you dislike good people who speak out against the present government, please don't bother to read this book. It will only raise your blood pressure.

Besides the stories and the humor, one of the things I love the most about this book-- and the entire series-- is the cast of characters. From fiddle-playing Gabriel to his fizzy pink wine-loving Madelaine to Bart's wife who is ex-FBI and a steel-spined force of nature called Pidgeon, each character is special. Even the ones you never get to meet like Hoyt's Granny Dulcie, who "found the good in people and made them live up to it."

Reading Bowen's novels reminds me of my childhood when I would sit behind an easy chair or underneath the kitchen table and listen to the old folks talk. These relatives in their seventies, eighties, and nineties knew the previous century, and they certainly knew how to tell a tale. Listening to them, I learned that you took care of your own, you helped other folks when they needed it, you stood on your own two feet, and you never started a fight-- but when one was forced upon you, you finished it. And since I come from a long line of farmers, it sounds normal to me when customers walk into the Toussaint saloon for a meal and a good time and ask, "Who are we eating tonight?"

Solus ("a man alone" in Latin) isn't just about Hoyt Poe, although he's certainly one of the loneliest people on the planet with so many bad guys after him. It's also about people like Gabriel Du Pré and his friends. As I said before, this may not be a book or a series for you, but if it does sound intriguing, please give it a try. For the right reader, Peter Bowen is a very special writer.