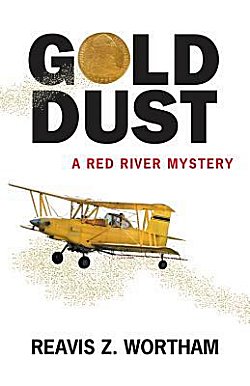 First Line: The Devil was beating his wife when the rusty green cattle trailer backed through an assortment of oak, pecan, elm, and hackberry trees surrounding a warped and sun-splintered catch pen.

They both should have known better. The crop duster should've known that the two nondescript men with a lot of money to offer had more than checking wind currents and weather patterns on their minds, and fourteen-year-old Pepper Parker should've known better than to let jealousy of a sexy older woman incite her to make up a story about a hidden fortune in gold. But they didn't, and it didn't take long for things to unravel in Center Springs, Texas in the late 1960s.

The biological agent sprayed across the area makes some people sick and puts Pepper's cousin, Top, at death's door. When Top's grandfather Constable Ned Parker finds out about the crop duster, the government, and the supposedly benign biological agent called "Gold Dust," he and a retired Texas Ranger head east to set things straight. While they're gone, the rest of local law enforcement has to deal with cattle rustlers and the effects of the entire area being overrun by treasure hunters.

If like me, you like some good, old-fashioned frontier justice from time to time, you'd have a difficult time finding anyone better than Reavis Wortham to get the job done. Gold Dust is the continuation of his excellent Red River series-- a series that I will never willingly miss an installment of. Why? Because I love the way Wortham tells a story. He's true to his Texas roots, and the language and the time period of the late 1960s. He also creates characters readers can really care about, and adrenaline junkies will fall in love with his action scenes. (And I have to admit that one of the reasons why I enjoy those hair-raising action sequences is because some of the participants tend to be very spry old folks.)

A bit of frontier justice has never seemed more fitting than here in Gold Dust when you've got the government doing things it knows it shouldn't be doing, but I've got a bit more to say about the subject of justice. In previous reviews, I've made no secret of the fact that there is one character in this series who rubs my fur the wrong way: Pepper Parker. That girl really makes me talk to myself, which is a huge compliment to Wortham's skill in characterization. Pepper wreaks havoc with that gold story of hers, and when her "bill came due," I just wish the amount had been higher. I despair of that girl ever getting her head screwed on straight.

But enough belly-aching about a fictional person. If you're a fellow fan of these wonderful Red River mysteries, you have a treat in store. If you have yet to sample them, I suggest you start at the beginning with The Rock Hole. You've got some mighty fine reading ahead of you!