Dead of Night by Michael Stanley 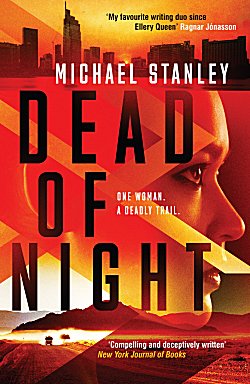 First Line: Michael Davidson wiped the sweat off his face, irritated that his hand was unsteady.

When freelance journalist Crystal Nguyen gets the go-ahead from National Geographic to research an article on rhino-horn smuggling, it's the fulfillment of a lifelong dream of visiting Africa. Within a week of landing in South Africa, she's hunted poachers, been hunted by their bosses, and been arrested in connection with a murder. Following a lead, Crystal gets out of South Africa and goes undercover in Vietnam to expose the lynchpins behind the rhino-horn smuggling operation.

But discovering the plot behind the money is only half the battle. Returning to South Africa, she has to convince authorities to take action before it's too late-- both for the rhinos and for herself. She'll have a powerful story to tell... if only she survives long enough to tell it.

When you read any novel by the writing team of Michael Stanley, you know you're going to be told a fast-paced, exciting story with an incredibly vivid setting and fully fleshed characters. Not only that, you're going to learn a few things along the way. And that's exactly what you get with their thriller Dead of Night.

The authors do us a great service by unfolding all the complexities woven into the problem of rhino-horn smuggling. I have to admit that when I learned how a great deal of the powdered rhino horn is actually used, I had thoughts of putting the buyers into enclosures containing a few disgruntled rhinos that still had their horns. But I digress.

I've already mentioned the fast pace, setting, and characters that are hallmarks of any Michael Stanley story, but I left out one: these two know how to craft a compelling mystery. My little grey cells were given a workout trying to deduce exactly what was going on.

To my way of thinking (and reading), there was only one fly in the ointment: Crystal Nguyen. She had many admirable qualities: she's a talented writer and photographer, she's brave, and she's relentless when it comes to teasing out the clues she finds. But... I found her extremely irritating. One night she's put in charge of the camp where she's staying. With several naive tourists in residence, there was a high probability of issues arising during the night. What does she do? Sleep in the nude so she's got to stumble around in the dark to find her clothes before she can go out and take care of a situation. Smart, eh?

But the thing that almost drove me crazy was the fact that Crystal is told repeatedly by several people who have experience in these matters that you never know who you can trust, so don't tell anyone what you know. Does she pay attention? Heavens, no. She repeatedly ignores the advice... and repeatedly gets herself into life-and-death situations.

I have to say that, although I love Michael Stanley's writing, I hope Dead of Night isn't the beginning of a series because Crystal Nguyen is a character that I wouldn't follow into the next room, let alone out into the bush. But as always-- your mileage can certainly vary!

Thriller, Standalone
Rating: B+
Source: Purchased from The Book Depository.