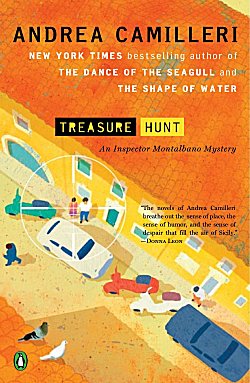 First Line: That Gregorio Palmisano and his sister Caterina had been churchy people since childhood was known all over town.

Inspector Montalbano makes headlines when he's caught on film scaling a ladder to capture two elderly snipers who have opened fire on the people in the plaza below. The inside of the apartment is a nightmarish mix of religious objects... and a well-worn inflatable sex doll. Hailed as a hero, peace and quiet descends upon Montalbano's patch once more until he begins receiving cryptic notes  challenging him to go on a "treasure hunt." At first treated like amusing riddles, these messages begin to take a sinister turn, and Montalbano is no longer in withdrawal.

Not every book in a long-running series such as this can be a winner, and Camilleri's Treasure Hunt is not one of his best. I found it jarring. After the incident in the elderly snipers' apartment, Montalbano has to deal with "homicide withdrawal," and this is when the book takes a turn toward slapstick comedy (which is often hilarious). My favorite switchboard operator, Catarella himself, also has several scenes. Then in the last hundred pages, the tone becomes dark as the plot concentrates on the author of the treasure hunt.

Treasure Hunt is definitely a marriage of total opposites, and like many marriages, it's not completely successful. However, it is to be enjoyed for its wonderful sense of humor and for the chance to watch Montalbano's mind at work. His intuition is phenomenal. (In addition, it has added to my store of colloquialisms: "having a few cats to comb" -- a Sicilian expression which means to have tedious, difficult, and useless chores to attend to. Love it!)