The Last Hours by Minette Walters 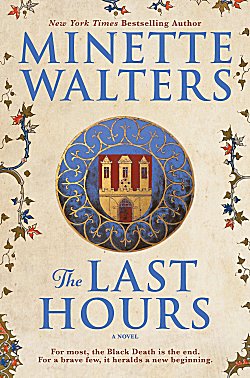 First Line: The summer heat was sucking the life from Develish.

When the Black Death entered England through a port in Dorsetshire in June 1348, no one could possibly know what was going to happen. No other sickness had ever spread or killed so quickly. People began to believe that the plague was a punishment for wickedness, but Lady Anne of Develish had her own ideas. Being both literate and knowledgeable, the convent-educated Lady Anne is a rare woman.

With her brute of a husband visiting another estate when news of the plague reaches her, she makes the decision to bring her serfs inside the safety of the moat and then refuses entry to anyone else-- including her husband. Her decision has made enemies of both her daughter and her steward, but Lady Anne has the full support of her serfs-- until food stocks run low. Someone must cross the moat and brave the outside world if the people of Develish are going to survive. But who will be the ones chosen to go, and what will they find?

Minette Walters' The Last Hours had me so firmly in its grip that if I'd looked up from the book to see a rat, I think I would have called in an airstrike just in case the loathsome rodent was carrying the plague. The first part of the book is a nailbiter as Lady Anne and her serfs make their preparations and then fight off the repeated attempts of those wanting inside the manor. Then the action settles down into two main storylines: Lady Anne and the serfs trying to stay alive and repel all boarders, and the serf Thaddeus and five teenage boys who go out into the world to find food and other survivors.

At over five hundred pages, this is a big book, but the story moves quickly and does not bog down. This is helped mainly by the fact that Walters has populated her book with so many strong characters. There's an entire mystery surrounding Lady Anne's daughter Eleanor, who's been so spoiled by her father that she reeks. If her mother says it's daylight, Eleanor will take an oath on the Bible that it's night. I think the only thing preventing the other characters from locking Eleanor down in the dungeon is the fact that they don't have one. As written by Walters, Eleanor is the one character to make your blood pressure climb into dangerous territory. There are several other characters just as memorable as Eleanor (like her mother Anne), so shame on me for spending so much time on the little wench, but I'll let you discover the others for yourselves.

Walters shows you both Lady Anne's enlightened way of thinking and the beliefs and attitudes of the other people in southern England. It reminded me of some facts that I'd forgotten. (Such as the subject of cats. Cats would have been excellent creatures to have around since they would've killed the rats that were largely responsible for carrying the plague, but at that time cats were believed to be familiars of the Devil and most of them were killed.)

As the action progresses, we start to see how the world is going to change, and by the end of The Last Hours, I found myself looking forward to how Walters is going to continue her story. If you enjoy historical fiction with a nice little mystery wrapped inside, this is definitely the book for you.

Historical Fiction, #1 in a planned series
Rating: A
Source: the publisher