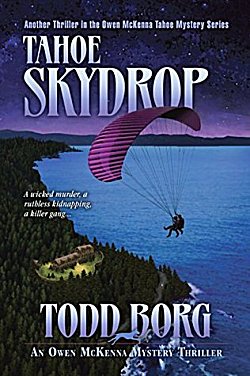 First Line: As Yardley LaMotte looked out the open door of the helicopter, he knew he wasn't a natural predator.

Yardley LaMotte had a vision for the future and created the software that could make that vision come true. Greedy killers had a vision of making billions of dollars and stole LaMotte's software. Now all they need is the key to unlock the code. When they learn that a child attending one of LaMotte's school visits can probably break the code, the killers kidnap the child. The father contacts Tahoe detective Owen McKenna.

McKenna learns where the kidnappers are holding the child and plans a daring rescue using a paraglider to drop out of the sky at night. But the plan goes very wrong, and it's up to Owen and his Great Dane Spot to save the child before the kidnappers can carry out their threats.

Author Todd Borg has come through with the goods once again-- this time by paraglider. Tahoe Skydrop is another fast-paced story with plenty of great action sequences, but-- as usual-- this isn't a run-of-the-mill thriller. While you're trying to figure out how in the world Owen McKenna is going to save the day this time, you're also effortlessly learning fascinating facts about the software business, venture capitalists, and bitcoin. If that's not enough for you, there's the breathtaking beauty of Lake Tahoe that Borg describes so well. And if that's not enough for you, I saved the best for last.

Todd Borg has created one of the best casts of characters in crime fiction. Owen McKenna is a former San Francisco homicide detective who has an excellent working relationship with the various law enforcement jurisdictions in and around Lake Tahoe. In each book of this series, you learn more and more about what a good guy he is. (If he were real, I'd be tempted to fight his girlfriend Street for him.) You can see he's a good guy by the way he treats everyone, but in particular Street, an intelligent, fiercely independent woman who has definite ideas about how she wants to live her life. In this book, you can see what a good guy he is by the way he treats a dog that's trying its best to tear him limb from limb.

The people involved in the investigation also come to life. Yardley LaMotte, the man who thought he had the world by the tail until he came face to face with Job's Sister. Yardley's wife, who knew her husband didn't have a good grip on anything. He-Man Vince Cooper is the kidnapped child's father, and there's nothing he won't do to save Jonni. Jonni is the kidnap victim and is yet more proof that Todd Borg has a knack for portraying smart children. Then... there are the characters you assume you can take at face value... but don't. More than one of these characters have surprises up their sleeves.

And I haven't even extolled the virtues of my favorite Harlequin Great Dane, Spot. Spot isn't written as Super Dog. He's not faster than a speeding bullet, and he's not going to come racing into the kitchen to spell h-e-l-p in the mashed potatoes. He's just a very large dog that's very well trained and has an unbreakable bond with a good guy named Owen McKenna. Never underestimate what these two can accomplish.

If I still haven't persuaded any of you new-to-Borg readers to give Owen and Spot a try, I'm just going to have to keep at it because if you haven't read Todd Borg, you're missing out on some wonderful books. You have been warned!