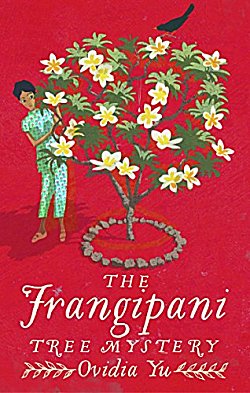 First Line: Charity Byrne had come to Singapore to look after Dee-Dee.

When the Irish nanny looking after Acting Governor Palin's daughter dies suddenly (and under suspicious circumstances), aspiring journalist and mission school-educated local girl Su Lin takes her place. Su Lin accepts the position not only to further her ambitions of a life of adventure but to escape an arranged marriage.

When another murder occurs, it seems very likely that there is a killer roaming the halls of Government House. It's going to take all of Su Lin's traditional skills and intelligence to help Chief Inspector Thomas LeFroy solve the crimes.

I was in the mood for a historical mystery set in an exotic locale, and Ovidia Yu's first Crown Colony mystery set in 1936 Singapore fit the bill nicely. The setting of The Frangipani Tree Mystery is worth the price of admission alone, but there is so much more to the book than its time period and location that I'm really looking forward to reading further in the series.

Even though I found the identity of the killer to be much too easily deduced, I fell in love with the character-- and the voice-- of young Chen Su Lin. Since she has a withered leg, orphaned Su Lin's prospects are grim according to her uncle who insists on parading one bribed and unattractive suitor after another past her. Luckily Su Lin's grandmother has insisted that Su Lin be educated, and it's this education as well as the influence of the mission school's head teacher that has made the young woman yearn for the freedom to do as she chooses. As Su Lin spoke, I kept hearing very faint traces of Laurie R. King's wonderful character, Mary Russell.

And if there's a Mary Russell, there should be a Sherlock Holmes, right? There is, in the newly-appointed Chief Inspector Thomas LeFroy. LeFroy is determined to use his wits and British know-how to ferret out any corruption in the police force and to put an end to crime in Singapore's streets. British he may be, but he's not the snobbish sort of Englishman. He speaks the language, appreciates the culture, and knows the traditions of the city in which he lives. And it doesn't take him long to realize that Su Lin is one very valuable young woman indeed. Originally hired to work as LeFroy's housekeeper, the inspector can readily see how important she can be to him as an informant in the acting governor's household.

With characters and a setting such as these, it's no wonder I'm looking forward to the next book in the series!