Morgue Drawer: Do Not Enter! by Jutta Profijt 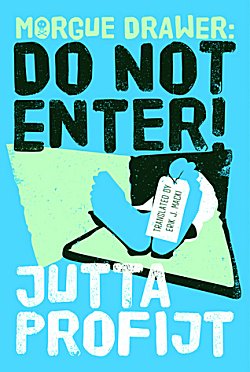 First Line: The Renault Kangoo van was wedged between the narrow piers under the bridge like a boil in a butt crack, but the driver's seat was empty.

Pascha is the ghost of a twenty-five-year-old car thief who, for some unknown reason, didn't "walk into the light." He's stuck in the environs of a morgue in Cologne, Germany, and the only living person who can hear him is Martin, the coroner. Trouble is, Martin doesn't want to hear Pascha and has gone to great lengths in an attempt to tune him out.

Since Martin would rather spend time with his girlfriend, Pascha has been hanging around hospital rooms and accident sites hoping to meet another spirit who will stay a while and keep him company. He gets more than he bargained for when four small children are gravely injured in a car accident and put into induced comas, setting their spirits free to roam. In addition, the teacher driving the van seems to have vanished. Now Pascha is a very reluctant babysitter and an extremely eager detective.

I've been enjoying this series. The voice of Pascha has been alternately hilarious, touching, and exasperating-- and the attempts of Martin to tune him out can be funny as well. I feel for both these men; I understand Pascha's loneliness, and I can certainly understand Martin's frustration at being the only person who can hear this restless ghost-- especially since they are polar opposites in temperament.

As the series progresses, Pascha has found that his boundaries have changed a bit, and he takes advantage of that in an attempt to keep boredom at bay. He's found that he enjoys the "company" of a police detective named Gregor since he likes helping out during investigations, but Gregor can't hear him, and Pascha has found it increasingly difficult to get Martin to cooperate.

Morgue Drawer: Do Not Enter! deals with the very real problems with the drug trade as well as within immigrant communities and the mystery is a strong element in the book, as it has been in all the others in the series. However, the tone has changed, and at first I found it extremely annoying. It wasn't the fact that one of the children's spirits was a racist (although it didn't help). What bothered me was how Pascha had changed. It was almost as if that one child's behavior had set him free to express other, nastier, parts of his personality. Pascha's attitude is much darker in this book, and when it dawned on me why, I smiled. Profijt really thought through the progression of Pascha's character.

If the only person you could talk to was someone who couldn't stand you and went through all sorts of machinations to avoid you, wouldn't that get to you after a while? If you couldn't do the things you really love in life-- like go out with pretty girls or drive fast cars-- wouldn't you find your attitude changing for the worse? That's what's happening here, and it sets up the last book of the series beautifully. I'm looking forward to reading it.