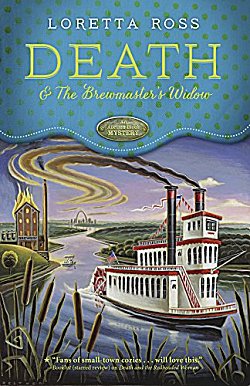 First Line: Death and the fire captain came in through the front door.

When firefighter Randy Bogart dies in an arson fire at an abandoned brewery, Death (rhymes with "teeth") Bogart and his girlfriend Wren Morgan go to St. Louis, Missouri to settle the dead man's affairs. When they stop at the firehouse, they are given Randy's badge, which was left behind because it needed to be repaired. But their questions begin when the coroner gives them another badge that was found on Randy's body.

Death is desperate to know what really happened, so he and Wren begin to investigate. Their searches lead them to a connection between Randy's death and the Cherokee Caves once used by nineteenth-century beer barons. But the more they dig, the more danger they put themselves in.

One of the minor obstacles readers must overcome in this extremely enjoyable series is the pronunciation of "death."  Death & the Redheaded Woman, Death & the Brewmaster's Widow, Death & the Gravedigger's Angel... all have the sounds of a regular mystery series until you discover that Death is the name of one of the main characters and it is pronounced "deeth" because he's named after Lord Peter Wimsey. That does take some getting used to, and once trained I still find myself pronouncing the word the Wimsey Way. But as I said, that is a very minor obstacle that doesn't take away from how good this series is.

The plot is downright Hitchcockian, and readers quickly realize that this isn't a matter of whodunit but how. On the surface, the plot may seem far-fetched, but in these days of trying to beat DNA tests and "Forensic Files," it fits right in. It's wonderfully twisted and bound to keep readers guessing. The only real quibble I had with it is Death putting himself and his compromised health into unnecessary danger.

However, this is not a plot-driven book. In addition to the author's lovely sense of humor, she's created the sort of people that character-driven readers (like myself) crave. I did miss the auction angle of the series, but at least the auction company's owners made a hilarious appearance or two. Wren is smart, funny, brave, and very caring. Death is a veteran who returned from war with ill health and a troubled mind. It's taking him time to recuperate, and he's taking it all in with a mix of good humor and exasperation. What is wonderful to watch unfold is the creation of his support system, people gathering around him who truly care for him and will help when needed. This is a man who has lost so much, and his journey adds an extra dimension to this series that raises it above the usual cozy mystery you read.

Whether you read for humor, twisty plots, or characters, you'll find all three in Loretta Ross's series. I urge you to give it a try-- at the beginning-- with Death & the Redheaded Woman.