The Unquiet Grave by Sharyn McCrumb 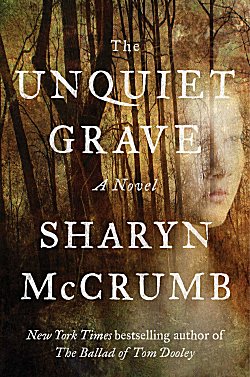 First Line: The place was as quiet as it ever got in the hours around midnight, with only occasional screams or sobs from the cells down the corridor to disturb his contemplation.

Following a suicide attempt, attorney James P.D. Gardner finds himself under the care of Dr. James Boozer in a segregated insane asylum in Lakin, West Virginia. It's 1930, and Boozer is eager to try the new talk therapy. It takes quite a bit of work for his elderly patient to open up, but when he does, Gardner tells of his most memorable case-- one in which he helped to defend a white man on trial for the murder of his young bride, a case the prosecution based on the testimony of a ghost.

In 1897, spoiled and pretty Zona Heaster went against her mother's advice and married Erasmus "Trout" Shue, a handsome blacksmith new to the county. Two months later, Zona is dead. A month after her funeral, her mother is determined to get justice for her daughter, so she goes to the county prosecutor and tells him that Zona's ghost appeared to her, saying that she'd been murdered.

Sharyn McCrumb is a master at finding strange-but-true bits of history that have taken place somewhere in the Appalachian Mountains and then weaving a mesmerizing tale around them. You can't get much stranger than a murder trial based on the testimony of a ghost, and that's a fact.

McCrumb tells her tale in a two-pronged approach. One storyline follows Gardner in the insane asylum in 1930. Gardner, the first black attorney to practice law in nineteenth-century West Virginia, is such a calm, measured, educated voice of reason that you'd never dream he could have been associated with such a trial-- or be a patient in an insane asylum.

The second storyline follows Mary Jane Heaster, first as she worries about her headstrong daughter's extremely poor life choices, and then as she fights to make "Trout" Shue pay for her daughter's death. There's very little doubt that Shue did indeed murder Zona, but there's no proof that would be admissible in a court of law. Make that a court of law in the twenty-first century. So-- here you have the sane man in the asylum and the possibly insane woman free to bend an entire courtroom to her will. Mary Jane Heaster is a force of nature.

The story is a good one, and the voices of Mary Jane and Gardner come shining through. Through them, you really get a feel for how people lived and thought back then. I've long been an ardent fan of McCrumb's Ballad novels; in particular, the ones featuring Nora Bonesteel and Spencer Arrowood are lyrical and... marvelous. Although The Unquiet Grave is listed in some places as a Ballad novel, that's simply a matter of geography-- Ballad novels take place in the Appalachians. Regardless of designation, this is not one of McCrumb's better books. The pace drags, but even worse, there is no spark, no heart to the story she tells. If you want vintage Ballad, look for The Hangman's Beautiful Daughter, She Walks These Hills or The Rosewood Casket. That's where you'll find gorgeous writing and heart and soul.