The Otter of Death by Betty Webb 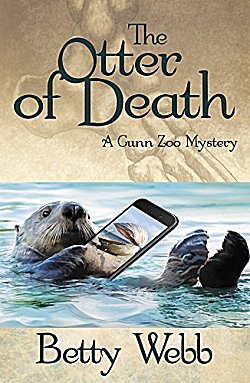 First Line: Other than a few remaining wisps of fog, the morning was your standard California morning: perfect.

Zookeeper Theodora (Teddy) Bentley is taking the yearly otter count at a marsh near Gunn Landing Harbor when she sees one of her favorite otters clutching a smartphone. When Teddy rescues the phone, she sees a photo of a murder-in-progress and quickly calls the police. After a short search, they find the body of much-disliked Stuart Booth, a local marine biology instructor.

Booth was notorious for sexually harassing young female students, and Teddy is quite content to leave the investigating to the police until her friend Lila is arrested and charged with his murder. This creates a lot of tension with her fiancé, Sheriff Joe Rejas, and puts her life on the line as Booth's killer definitely does not want to be found. It's going to take a lot of investigating before Teddy will be allowed to go back to making some very important decisions about her personal life.

Betty Webb has created a fast-paced, light-hearted series that's just plain fun to read, and-- I'm happy to say-- The Otter of Death is the best of the bunch (so far). Personal relationships loom large in this book, with Teddy and Joe still having issues to iron out before contemplating setting a wedding date. There are also the soap opera-like intrigues amongst the other staff members at the Zoo. But it's not all who-did-what-to-whom. There's a tightly woven, intriguing mystery here, and Webb gives us animal lovers something else we crave: creatures of all shapes, sizes, and personalities. We learn about animal behavior, the ecology, and why flushable kitty litter is a no-no.

I have to admit that, although the mystery is excellent, I get my critter fix, and it's fun to catch up with the lives of characters I've grown to care for, it's the humor that is absolutely stellar in The Otter of Death. I laughed so hard at the Anteaters to Zebras live segment on Good Morning, San Sebastian that I woke up the neighbors' dog and made it bark. And if you don't love the identity of the cavalry that rides to Teddy's rescue at the end of the book, well... there just may be something drastically wrong with your funny bone. Make an appointment with your doctor.

Some of you may be familiar with Webb's other series featuring private investigator Lena Jones in Scottsdale, Arizona. It is marvelous and discusses some very serious issues. In Webb's Gunn Zoo mysteries, she gets to showcase an entirely different side of her personality, and these books are so much fun. It just goes to show that Betty Webb can handle both the serious and the humorous sides of your own reading personalities. If you're not already a fan, what are you waiting for?