The Bomb Shelter by Jon Talton 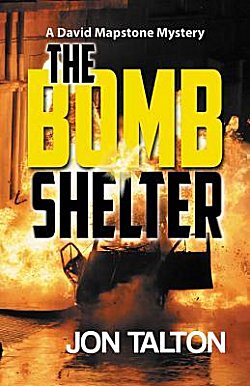 First Line: At 11:10 on the morning of Friday, June 2nd, 1978, Charles Page spun the platen knob of the Smith Corona Classic 12 typewriter on his desk at the Arizona State Capitol pressroom.

Forty years ago, a car bomb killed a newspaper reporter in Phoenix, Arizona. Three men went to prison for the crime, but were other people involved? Did a kingpin order the hit and get away with it? Despite the work of teams of professionals, no one's been able to uncover the truth.

It's a case that's perfect for historian-turned-sheriff's deputy David Mapstone, and his newly re-elected boss knows it. When Sheriff Mike Peralta promises to reopen the investigation, it triggers new murders that are reenactments of Phoenix's mob-riddled past. Mapstone needs all the help he can get, so he enlists a Ph.D. candidate and Black Lives Matter activist to join him in searching through sealed archives. Mapstone's wife, Lindsey, joins the investigation, too. The trouble will be trying to find the answers before anyone else dies.

I always learn something fascinating about Phoenix's history when I read one of Jon Talton's David Mapstone mysteries. This time Talton works his magic on the very real 1978 car bombing death of reporter Don Bolles-- something that happened shortly after I moved to Phoenix. The author can still give me thrills when I read about an historian's excitement upon uncovering primary sources, and there are so many layers to this investigation and so many well-known names that I was compelled to keep reading faster and faster.

Talton does not let up on the tension or the action in The Bomb Shelter, and there's even some mood-lightening humor from time to time. It's fun to speculate about how close he came to solving the Bolles murder. His main characters-- Mapstone, wife Lindsey, Mike Peralta, and new addition Malik Jones-- are well-drawn and feel almost as though they're members of my family. Especially Mapstone. With his constant whining about the heat here in Phoenix, I want to look at him like he's my cousin Steve and say, "You're a native Phoenician. It gets hot here. Suck it up (and shut up)!"

This is a series I've loved since the first book, Concrete Desert. Talton is a gifted storyteller, and I love reading about the characters he's created and learning a bit about the fascinating history of my adopted hometown. It will be interesting to see where he takes his readers next.