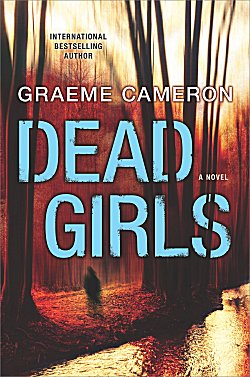 Two months ago, police detective Ali Green was attacked by a serial killer and left for dead. It's been two months since she could easily recall simple things, two months since her mind felt whole and completely her own. But with more girls falling victim to this killer, Ali has been put back on active duty early, and she's determined to catch this man before he can kill anyone else. But when conflicting statements from a witness and a surviving victim threaten Ali's investigation and her credibility, she begins to question herself and what is and isn't real. The clock is ticking.

The prologue of Graeme Cameron's Dead Girls is excellent; the race to save a missing girl and police officers' lives being in danger yanked me right into the heart of the story. This is a fast-paced tale that can, at times, be bloody, although there is some tiny consolation for female readers in the fact that it's a man's blood being shed instead of a woman's.

This may be a thriller, but the characters and their behavior are what fuel the action. Erica Shaw is the missing girl everyone is frantic to save, but as the story progresses and more facts come to light, readers begin to question her innocence. Is it possible that she's a victim of Stockholm Syndrome-- or something else?

And of course, Ali Green is front and center. The victims and their families are all-important to her, and she will do anything it takes to bring them justice. However, she has suffered major head trauma and is back at work against doctors' orders. The further into the investigation she gets, the readers (and some of her co-workers) realize that she is occasionally hallucinating and speaking aloud without realizing she's doing so. Her shifting focus can have readers distrusting all the other police officers until they begin to wonder-- how much is Ali affected by her injuries? Can she be relied upon?

After seeing how skilled Cameron is with his story, characters, and pacing, I'm definitely looking forward to reading more of his work.