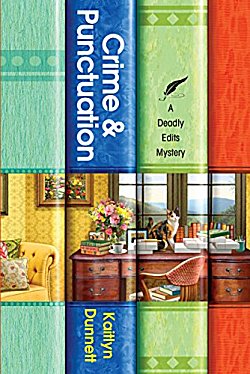 Recently widowed Mikki Lincoln has returned to the Catskills in New York state after buying her childhood home. But that purchase means that she has to come out of retirement and become a freelance editor. With her ability to spot details that others miss, it doesn't take Mikki long to earn clients, and aspiring novelist Tiffany Scott wants to add to her workload.

After agreeing to terms, Mikki accepts the young woman's manuscript and reads the first chapters. What she finds sends a chill down her spine. Not only is the manuscript based on her hometown's not-so-distant past, Tiffany Scott turns up dead the very next day... just like the victim in her story. Mikki is convinced that Tiffany's death was not accidental, especially after finding an inconsistency in the manuscript and a possible motive in her research notes. When police refuse to take her seriously, Mikki knows she's got to keep digging on her own. Unfortunately, the only person who does take her seriously... is the killer.

Readers of Kaitlyn Dunnett's first Deadly Edits cozy mystery may learn quite a few helpful tips about proper English usage, but they're also going to read an engaging story featuring a main character they're going to love. Mikki Lincoln is sixty-eight years old, wears hearing aids, and knows all about the Oxford comma. Until his death, Mikki's husband was the center of her world, but now Calpurnia the cat is the only other living soul in the childhood home that she's busy fixing up. Mikki realizes that she has to relearn how to make friends, but she has already found one: Darlene, a former head librarian who had to take early retirement due to her crippling arthritis. Her mobility has been affected so much that she gets around on a combination of walker, electric scooter, and wheelchair.

Mikki and Darlene prove that you don't have to be perky, toned, hunk-on-the-brain twentysomethings to solve crimes, and that's good news for many readers amongst us. Both of them are intelligent, honest, and filled with common sense. (I also love Darlene's way with her electric scooter.)

I have to admit that learning the differences between copyediting, line editing, and developmental editing was fascinating, and so was the fact that the author brought in the area's ties to Murder, Inc. as part of the mystery. Actually, the only thing I didn't like about this delightful book is the fact that Dunnett seemed to telegraph the identity of the killer. But... with so many other things-- and characters-- to enjoy, it really didn't matter all that much. In fact, I'm looking forward to my next visit with Mikki and Darlene. (Never underestimate the power of two "old" women!)