Whispers of the Dead by Spencer Kope 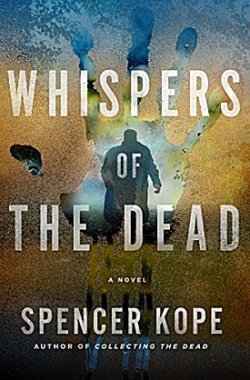 It's difficult to identify a dead body from just the feet-- at least that's what Magnus "Steps" Craig of the FBI's Special Tracking Unit learns when he walks into the house of a Federal judge in El Paso, Texas. There are no clues as to the identity of the killer, the victim, or the reason behind having the feet inside a cheap styrofoam cooler; the only thing the authorities feel safe in saying is that this isn't the killer's first victim, and probably not his last.

Part of an elite team, Steps is the best tracker in the world, but only three people know that his talent lies in a kind of synesthesia that allows him to see whatever each particular person has touched in a unique color.

With the team still trying to come to grips with the case in El Paso, they discover an earlier victim with the same feet-in-a-cooler presentation-- and somehow they know that the "Ice Box Killer" has just begun.

In 2016, Spencer Kope wowed me with his first Special Tracking Unit mystery, Collecting the Dead, and I'm thrilled to say that he hasn't taken his foot off the gas for Whispers of the Dead. There's a razor-sharp investigation here, as well as a fast pace, and a group of characters who are more like family than mere work colleagues.

The way Kope puts the clues and the investigation together is completely absorbing, partly due to Steps' special gift of synesthesia. An FBI tracker can't go to the police and say, "Here's your killer. I know he did it because he left a dark olive and lime green 'shine' on the body and the murder weapon, and his tracks led right back to his apartment." No, that would be a sure way to get a ride to the psych ward at the local hospital. Steps not only has to interpret the shine-- the unique colors individuals leave on everything they touch-- he has to find the evidence that will hold up in a court of law. It's not always easy, but he and his partner Jimmy Donovan are professionals.

Whispers of the Dead isn't just about the investigation; it's got a very human element. Kope shows the damage a life in this sort of business can cause to a marriage and a thing or two that can be done to make sure this doesn't happen. In addition, he has a way of making you think differently about some of the characters than you think you should. Steps is also coming to realize that he should've told a couple more people about his gift a long time ago. Now it's going to be awkward when he finally does.

Not all readers like continuing storylines in the books they read, and there is one here. The Ice Box Killer investigation is successfully concluded, but there's another killer-- one even more intelligent and dangerous-- who's been taunting Steps for quite some time. Steps calls this killer "Leonardo," and I'm really looking forward to the book when Steps can concentrate on bringing him to justice. I've gone from thinking Spencer Kope's first book is brilliant to knowing that he's creating a fantastic series. Hopefully, you'll join us on the journey (if you haven't already).