Collecting the Dead by Spencer Kope 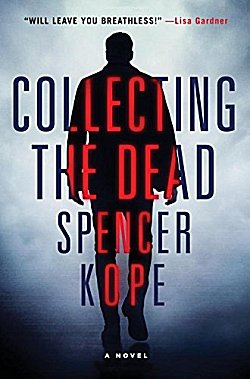 First Line: She had small feet.

The elite Special Tracking Unit of the FBI has only three members. Diane, who works in the office, is brilliant at uncovering information. She's also the glue that holds the unit together. Special Agent Jimmy Donovan and Magnus "Steps" Craig find themselves spending a lot of time at crime scenes. Steps is known as "the Human Bloodhound," and there's a secret to his success that only three people know. He has a kind of synesthesia that allows him to see the essence of a person (what he calls "shine") on everything they've touched. Every person's shine is unique in color and texture.

When the remains of a woman are found, Steps recognizes the shine left by the murderer from another crime scene he worked. By piecing things together, he and Donovan find themselves on the trail of a serial killer-- one who's not afraid to come after the Special Tracking Unit in order to keep his secrets hidden.

From almost the first page, I was blown away by Collecting the Dead. Steps Craig has the world-weary voice of a man who's in his late forties or fifties, so I was shocked when I put two and two together and discovered this character is only twenty-seven. I suppose that's what happens when you refer to yourself as "just the undertaker's front man."

This is a tale marvelously told, from its well-paced, engrossing plot, to its lyrical descriptions and multi-faceted cast. Spencer Kope has written a barn
burner of a book that can have readers laughing one second and trying not to cry the next. And... like Diane is the glue that holds the Special Tracking Unit together, the entire cast holds Collecting the Dead together.

For the most part (but not always), the various police jurisdictions work together well with the FBI. These are professionals whose main aim is to save innocent lives, and this dedication adds a sense of urgency and tension to the book. Some of the more interesting scenes come when Steps and Jimmy Donovan try to find acceptable ways to divulge their "shine" findings to the police. But this "shine" often takes a backseat to the grunt work of checking and rechecking facts, reports, photos, interviews-- the very things that often break cases wide open. Kope walks a fine line between Steps' synesthesia and the more "mundane" police work extremely well.

Throughout Collecting the Dead, we watch Steps collecting information about a serial killer he calls Leonardo. It's his aim to catch Leonardo, and I sincerely hope readers get to watch him do so in a second book. I was buried so deeply in this story that my husband had to clap and shout at me to get my attention. I want to have that happen again. I want more Steps Craig-- and I'm certain you will, too!