The Dark Side of Town by Sasscer Hill 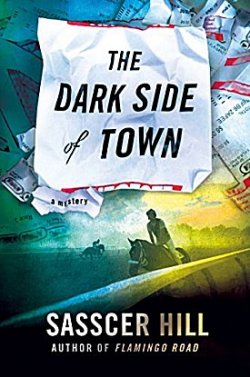 Now an official employee of the Thoroughbred Racing Protective Bureau (TRPB), Fia McKee is working undercover as a hot walker at Saratoga Racetrack to investigate trainer Mars Pizutti since the horses Pizutti trains are suspiciously lucky and lucrative at crossing the finish line.

Fia's bosses  are convinced that Pizutti's success has a lot to do with illegal drugs and deceitful methods, but when she witnesses the tragic aftermath of a jockey's suicide, Fia learns that the rider's death is just the tip of an iceberg involving death threats, the mob, and a crooked racing hedge fund. She's got to work fast to learn the truth before anyone else dies.

Although I grew up loving horse racing and books, I've never read one of Dick Francis's mysteries; however, I'm positive that Sasscer Hill is creating a series that is a worthy successor to his renowned mysteries taking place in the glamorous and seedy world of racetracks. Hill has an insider's knowledge that you can feel as you turn the pages, and she's equally adept at painting the beauty of horse racing as well as its seamy side.

The Dark Side of Town is fast-paced and has scenes in which you'll find yourself holding your breath-- sometimes literally-- but I'm not going to give you any more information about those so the surprises won't be ruined. Even though the overriding theme of the book is horse racing, there's an excellent cast of characters for those readers who enjoy more of a human element in their mysteries. Fia finds herself dealing with the mother who deserted the family when Fia was a child, and there's a young jockey anyone would want to befriend.

Then there's her burgeoning relationship with fellow TRPB employee Calixto. Every time Fia is around this sexy agent, she's so charged up that the Saratoga city fathers should hook her up to the power grid. (Wow...) Now I'm one of those females who doesn't like much romance in her mysteries, but most of the interactions between Fia and Calixto make me smile. I don't know if it's because I'm picturing that Saratoga power grid or what.

A fantastic setting, a complex mystery, chills, thrills, and a solid cast of characters-- let The Dark Side of Town take you across the finish line in style.