A Tangled Yarn by Betty Hechtman 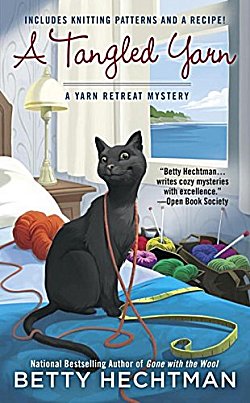 First Line: Did I really want to do this?

Casey Feldstein is field testing a new muffin, which isn't a good idea when she's also up to her eyes in preparing for the latest yarn retreat at the Vista Del Mar Hotel. The retreat barely begins when it becomes clear that those attending aren't very happy with learning the chosen arts of arm knitting and finger crochet.

Things go from bad to worse when a travel writer from a neighboring retreat group is found dead in his room. Casey had sworn off doing any more amateur sleuthing, but when one of the owners of the Vista Del Mar pleads for her help, Casey can't say no.

One of the things that I enjoy most about Hechtman's Yarn Retreat series is that she doesn't forget about the "hook," or what made me start reading the series in the first place. (I like to knit.) Not only does the author always include yarn arts in her storyline, she also makes me feel as though I have a good idea of how these yarn retreats work.

This is the first time that a retreat has gone wrong with its choice of classes, although I had serious doubts about combining two trendy arts-- arm knitting and finger crochet-- instead of combining one trendy with one traditional. Having worked in customer service for a long time, I had to smile when Casey had her first two attendees who seemed to pay the fees and show up simply for the pleasure of non-stop complaining. Yes indeed, it's all about how you deal with those folks!

A Tangled Yarn is another example of a trend I've noticed in cozies lately: that of having the main character swearing off amateur investigation yet having a friend guilt/embarrass her into doing it anyway. In some ways, this irks me because it shows that the character has no spine, but that's just me. Regardless of how I feel about trends, there's a good, solid mystery here and a cast of characters I really like. This is another fun entry in one of my favorite cozy series.