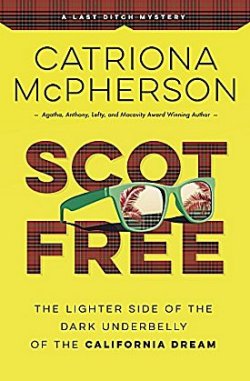 First Line: Outside my window, mortars fired rockets into the darkness and the night was rent by the crack of gunpowder and the screams of children.

It was a whirlwind courtship. Marriage counselor Lexy Campbell met a handsome dentist on a golf course in Scotland, married him, and left to live the golden life in California. Six months later, she's divorced, broke, and getting ready to head to the airport and go home. The only thing that keeps her from returning to Scotland is octogenarian Mrs. Bombarro, her only client, who's been accused of killing her husband with a fireworks rocket and is now sitting in jail.

Knowing the cops have it all wrong, Lexy decides to postpone her departure for a few days so she can clear the elderly woman's name. She finds a cheap place to sleep at the Lassditch Motel... and finds her task complicated many times over by the motel's strange collection of residents.

I've had a hit-or-miss affair with Catriona McPherson's writing. Her Dandy Gilver historical series is so period correct that the one book of the series that I read reminded me too much of those Golden Age mysteries, which I really don't care for all that much. On the other hand, I loved the one standalone psychological suspense novel of hers that I read, The Child Garden. When I learned of Scot Free, which appeared to be written for laughs, I simply had to try it because I've witnessed McPherson's humor firsthand. This woman is a riot, and she kept us all laughing at Left Coast Crime in 2016.

Scot Free was a tad uneven, staggering a little between the humor and solving the mystery, but I still enjoyed it a lot. The residents of the Lassditch Motel are a quirky bunch who rapidly became Lexy's family. And-- wonder of wonders-- as a first-time amateur sleuth, Lexy's not the sharpest knife in the drawer. Her gullibility muddles her investigation more than once. At first, this annoyed me, but it finally dawned on me that most first-timers are going to be gullible and not know what to do from one step to the next. Silly me!

What's more, I loved the humor-- especially Lexy's comparisons between the California lifestyle (which is where McPherson lives now) and that of her native Scotland (where she grew up). Some readers may find these comparisons off-putting and anti-American but it's spot-on social commentary, plain and simple.

With a brilliant cast of characters and the oftentimes hilarious social commentary, I'm really looking forward to the next Last Ditch mystery. You will be, too.