The Child Garden by Catriona McPherson 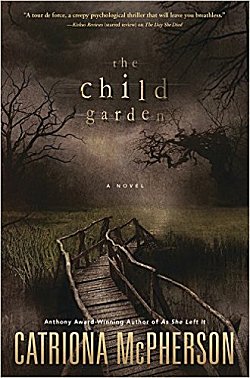 Gloria Harkness has a responsible job, and she's found the perfect home: remote and close to her son, Nicky, so she can visit him every day. Her entire life revolves around the boy, but when a childhood friend shows up on her doorstep with a strange story about being stalked by a woman he went to school with years ago, she doesn't hesitate to help.

Gloria's nearest neighbor is the now-derelict school known as Eden. It wasn't open very long due to a child's suicide. Everyone connected with Eden seems to want to stay far away from it, and Gloria's friend is no exception. But the woman stalking him has persuaded him to meet her at the site of that long ago suicide, and Gloria is going to go with him. Within the blink of an eye, Gloria is in over her head, and everything-- and everyone-- she holds dear is in danger.

Having met the marvelous Catriona McPherson at 2016's Left Coast Crime, I was determined to give her books another try. I'd already read the first of her Dandy Gilver mysteries, but since I'm not a fan of Golden Age mysteries, After the Armistice Ball really wasn't my cup of tea. Anyway, back to the drawing board I went, and I discovered that McPherson has written several standalone suspense novels, and I chose The Child Garden. I'm glad I did.

The character of Gloria Harkness almost immediately wrapped itself around my heart. Her young son Nicky is severely disabled, yet everything in Gloria's world revolves around him. If something goes wrong, her first thought is of how it will affect her son. She's chosen a job that will allow her to be with him everyday. She's found affordable housing close by. It would be almost impossible for me to remain completely unmoved by a woman who is so loving, so loyal... and so alone.

McPherson weaves a palpable feeling of dread into this story. A feeling of isolation... of someone who has gone to ground and wants only to be safe and left alone. The second Gloria agrees to help her friend, everything begins to go wrong. She's just got that kind of luck, and McPherson's swift and sure pacing guides us through a downright diabolical plot. When the killer was revealed, I just shook my head. Of course! Now... why didn't I see that?

Sometimes it can be very wise not to give up on an author. Even though I didn't enjoy her historical series featuring Dandy Gilver, I could tell that they were well-written and fit into that Golden Age style beautifully. (In other words, I could see the woman has talent.) When I learned that she writes novels in the modern, psychological suspense vein, I remembered that talent, and gave The Child Garden a try. This is when I struck pay dirt. I'm definitely reading more of her non-series work!