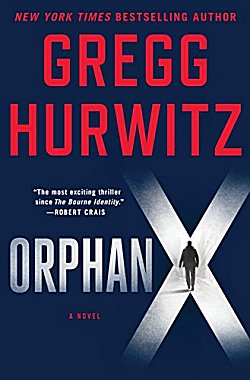 First Line: Evan's twelve-year-old body is stiff in the cushy passenger seat of the black sedan as he is driven in silence.

If you are truly desperate and deserving, someone may give you the phone number of the Nowhere Man. He's a legendary figure who can and will do anything to protect and save you. But the legend has a name: Evan Smoak, a man with an extraordinary skill set and a stockpile of resources that he uses on his personal mission to help those with nowhere else to turn. But his dangerous past is catching up with him.

As a child, he was raised and trained as an Orphan-- a member of a government off-the-books program designed to create the perfect deniable intelligence asset: assassins. Evan was Orphan X until he broke with the program and used his skills to disappear. But now there is someone with similar skills and training who is out to get him... and this shadow always seems to be two steps ahead.

I was in the mood for a good thriller and liked the synopsis of Hurwitz's Orphan X. This fast-paced story did deliver, but not quite as much as I'd expected. Hurwitz doles out Evan's backstory sparingly, which only makes readers want more. However, it is enough to wow you with the character's abilities and to make you want to hug the little boy he once was. As a result of his training, Evan really doesn't know how to play well with others. Actually, he doesn't know how to play with others at all, and we see this during his interactions with the other residents of the building in which he lives. There's the grumpy old lady who seems to lay in wait for him at the elevator so she can complain non-stop, but we normal folk would have problems with her, too. No, it's when Evan becomes acquainted with divorced lawyer Mia and her inquisitive eight-year-old son Peter that we see how much he has to fight against that long-ago training of his.

Where the soufflé fell for me was in the too-numerous-to-count fight scenes. Hurwitz wants us to know exactly how extensive Evan's hand-to-hand combat skills are, and each fight scene is laced with mixed martial art terms like "wing chan oblique kick." Over and over and over again. This is all well and good if you are a fan and want to be able to picture the fight in your mind, but I definitely do not fit that category. One movie scene comes to mind. Raiders of the Lost Ark. Indiana Jones is cornered in a bazaar by a sword-wielding showoff. Jones doesn't have time to wait for the nitwit to stop strutting his stuff, so he pulls out his gun and shoots him. Problem solved. Since this is the fight scene category I belong in, you can see where these minutely-described scenes in Orphan X made my eyes cross in boredom.

Since I have a feeling that these fight scenes will continue as the series progresses, I will leave Evan Smoak here in book one. But I am certainly glad that I made his acquaintance, and I wish him well.