Death in the Stacks by Jenn McKinlay 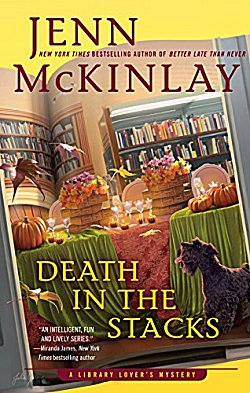 First Line: September in New England was about as perfect a season as there was on earth.

It's time for the Briar Creek Library's annual Dinner in the Stacks fundraiser, the biggest moneymaker of the year, and library director Lindsey Norris and her staff have no time to put up with the new library board president. Olive Boyle is behaving like Attila the Hun. Every time she makes an appearance, she's threatening to expose secrets and take away people's jobs. But no matter how much the woman gets up her nose, Lindsey is determined to stand up for herself and her staff and to make the fundraiser a success.

She almost gets away with it... until she finds one of her staff members crouched over Olive's dead body in the fiction section of the library. Paula's proximity to the body may make her the prime suspect in Olive's murder, but everyone who knows her knows she's innocent. Everyone looks to Lindsey to catch the real killer.

There are some series I have a tendency to hold back and read when I need a pick-me-up because they're special. Jenn McKinlay's Library Lovers is one such series. I know the author and her publisher would rather I gobbled them up as soon as each new book came off the press, but sometimes a girl just has to have a go-to book when she needs a little extra sunshine in her life.

Death in the Stacks provided me with just what I needed. I was back in the midst of a cast that has become old and dear friends-- especially with cameo appearances from McKinlay's Cupcake Bakery and Hat Shop series characters. Another thing that makes me smile is the continuing evolution of the lemon, Ms. Cole. Ms. Cole proves that there's hope for us all.

Not only did the entire cast keep me smiling (well, not Olive Boyle-- she is a very worthy body in the library), the mystery kept me guessing. There's lots of good misdirection, and I loved how the cupcake and hat shop folks kept appearing and disappearing from Lindsey's suspect list.

All in all, it was another marvelous visit with the gang in Briar Creek, and if there's one quote that I'll take away with me from this book, it's this: "There was nothing she loved better than laughter in the library." Libraries are, indeed, repositories of knowledge, adventure, dreams, and laughter. They are one of the cornerstones of civilization. Thanks, Jenn, for reminding us of this in such an enjoyable way.