Death Comes in through the Kitchen by Teresa Dovalpage 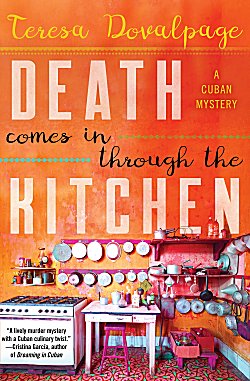 First Line: The Cuban customs officer lifted an eyebrow at the bridal gown-- a white satin bodice with tulle appliqués, sheer sleeves, and a two-foot train-- and took a long suspicious look at the couple.

After meeting her through her food blog, Yarmi Cooks Cuban, San Diego journalist Matt Sullivan flies to Havana to marry his twenty-four-year-old blogger girlfriend. But something is wrong: she doesn't meet him at the airport as planned. When Matt arrives at Yarmila's apartment, he finds her lying dead in the bathtub.

Naturally, the Cuban police and secret service have him down as their main suspect, so Matt has to conduct his own investigation into what really happened. However, the more he learns about his fiancée the more he realizes that he didn't know her at all... and he's beginning to think that no one else did either.

Cuban-born Teresa Dovalpage takes readers right into the heart of Havana; indeed, the setting was one of my favorite parts of the book. The other part I liked was the mystery itself surrounding Yarmila the food blogger. Having Matt realize that he really didn't know her was to be expected; what does come as a surprise is just what Yarmila was up to.

Unfortunately, except for Lieutenant Marlene Martínez of the magnificent posterior, none of the rest of the characters fired me up at all. Even the lieutenant fell a bit short, but I did like watching her run her investigation into Yarmila's death. Matt Sullivan, the main character, was particularly disappointing. He was gullible and ineffectual and more than once behaved like the sort of entitled American that makes me cringe.

Death Comes in through the Kitchen's setting and mystery are the stars of the show, but the characterization and pacing definitely need some work.