The Undertaker's Daughter by Sara Blaedel 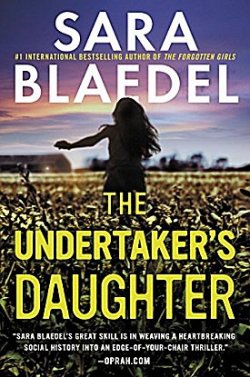 First Line: What do you mean you shouldn't have told me?

Although her father deserted her and her mother when Ilka was a child, when the forty-year-old school portrait photographer learns of his death, she is reminded that she's never really come to terms with that long ago rejection. It seems her father left her something in his will, and against her mother's dire warnings, Ilka flies from Copenhagen, Denmark to Racine, Wisconsin to find out what her legacy is. Has her father bequeathed her something that proves he really did love her after all?

Arriving in Racine, Ilka learns that her father left her a funeral home swimming in debt. All she wants to do is to go through her father's things, get the business ready for a quick sale, and go home. But then she stumbles into an unsolved murder and a killer who seems to be very much on scene, and her plans begin to change.

I hadn't read very many pages of The Undertaker's Daughter before I began forming an intense dislike for Ilka, the main character. She must be a prime case of arrested development: her mother knows Ilka's father better than Ilka ever will, but she hares off to Wisconsin like a bratty teenager because her mother couldn't possibly know anything. She's full of plans on what she's going to do once she gets there, but what does she actually do? Locks herself in her room, ignoring everyone all the next day, and when the person on the other side of the door finally gives up and shoves papers underneath, does she read them? Heavens no. She just signs them and shoves them back. Big mistake for the forty-year-old teenager.

She can't make up her mind what she's going to do. Is she going to go back to Copenhagen? Is she going to stay? Is she going to sell the business? Is she going to run it herself? I think the final straw for me was when she had a complete mess on her hands yet showed more interest in a date with someone she hooked up with on Tinder. My list of things that annoyed me about Ilka could go on for a day or two.

With my strong adverse reaction to the main character, you'd think I wouldn't have enough of my brain cells left to pay attention to the mystery. The mystery surrounding the cold case and the corpse in the cooler would have been far more engaging if the book hadn't been mired in page after page centering on the whiny Ilka. This is the start of a new series and ends on a cliffhanger. I don't think I need to tell you whether or not I'll continue with it. If you give The Undertaker's Daughter a try, I certainly hope you get much better mileage.