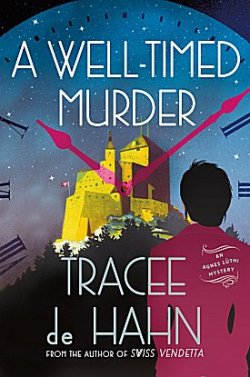 First Line: There was a crowd but none of them mattered.

Still recuperating from injuries she sustained in her last case, Inspector Agnes Lüthi is on leave in Lausanne, Switzerland, visiting the world's premier watch and jewelry trade show with a colleague. Another friend-- Julien Vallotton-- is also there and is looking for her. Vallotton was a friend of Guy Chavanon, a master watchmaker. Chavanon recently died, and his daughter does not think his death was accidental. Shortly before his death, he had boasted that he had discovered a new technique that would revolutionize the watchmaking industry, and his daughter believes someone killed him for it. Reluctantly, Agnes agrees to investigate, not understanding how secretive-- and ultimately dangerous-- the world of Swiss watchmaking is.

This is the second book in Tracee de Hahn's Agnes Lüthi series and like the first book, Swiss Vendetta, the setting of Switzerland in A Well-Timed Murder is particularly well done. I also enjoyed learning about the history of watchmaking, and Lüthi still has her well-developed eye for the telling detail as well as her ability to put all those clues together.

The beginning and the end of this book flowed smoothly and certainly kept my interest, but A Well-Timed Murder, to an even greater degree than the first book in the series, suffers from "too much middle" when the pace drags and the story begins to lose its focus. I'm in a quandry. I truly enjoy the setting and the main character, but I do not like reading a book where I find myself wanting to skim through the middle third. Will I read the next book? I do not know.