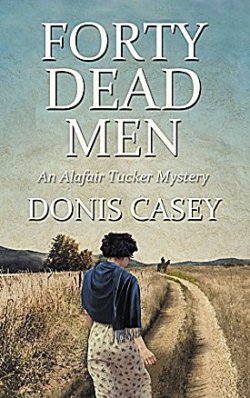 First Line: Scott Tucker, constable for the town of Boynton, Oklahoma, was glad to have his deputy back.

World War I is over, and Alafair Tucker is overjoyed. Her oldest son, George Washington ("Gee Dub") Tucker is home from the battlefields of France. But she seems to be the only one in the family who senses that Gee Dub has changed. He's restless and spends his days on horseback, roaming the countryside.

One rainy day, he is rejected when he tries to help a skittish woman he finds walking along the road. Undaunted, he goes home to fetch Alafair. He doesn't know anyone who can refuse his mother when she's determined. Once she's dry and warm at the farm, Holly Johnson admits that she's come all the way from Maine to find her husband, a soldier she married before he shipped to France. When Holly's husband turns up shot dead, Gee Dub is arrested for his murder. Now Alafair is well and truly involved. She will let no one harm her son or put him in prison. No matter what she has to do.

It's always a stellar day when there's a new Alafair Tucker mystery to be read, and Forty Dead Men continues this tradition. Donis Casey is a master at crafting book titles that grab a reader's attention and imagination, and once this newest title is explained, most will feel a little chill run down their spine.

Post-traumatic stress disorder is woven deftly into this story in which life on the farm for most of the Tuckers seems completely unchanged by the war. Gee Dub is having difficulties dealing with his experiences fighting in France, and the appearance of a lone woman trudging down a dirt road in the rain gives him focus, a quest. If he can fix what's wrong with Holly, perhaps he can fix what's wrong with him.

It's no surprise that the mystery is a good one in Forty Dead Men, and I happen to think that Holly's runaway husband is one of Casey's best bad guys even though readers never get to see him alive. (Some men's deeds certainly live on past their deaths.) But more than the mystery or the fascinating history that can be learned throughout this remarkable series, it's the cast of characters that keep me coming back for more. Alafair and her husband, Shaw, have ten children. Most of them are grown and have (or are starting) families of their own. Alafair could retire from sleuthing and have many choices among her children for her replacement. Just give her the grandbabies to keep an eye on.

In many of the series I read-- no matter how much I love them-- it feels as though the characters are put in a box and set on a shelf in the closet until it's time for the next book. Not so with Casey's Alafair Tucker mysteries. The Tuckers are so busy getting on with their lives that each book feels as though I'm sitting at Alafair's kitchen table for a cup of coffee and a "catch up" chat. These characters are so alive they practically jump right off the page, and aren't those just the sort you want to read about?

Mysteries to make you think. Tidbits of history for you to learn. Characters that will have you laughing, crying, feeling proud, or getting upset. All this and much more await those who pick up one of Donis Casey's Alafair Tucker mysteries. They are something very special.