With Vics You Get Eggroll by Diane Vallere 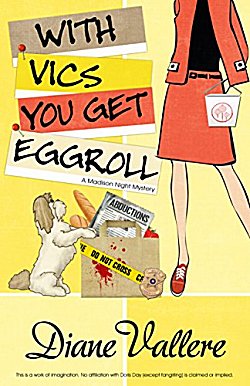 First Line: The flashing red and blue lights remained visible in my rearview mirror far longer than I would have liked.

Interior decorator Madison Night has her hands full. Although a demanding client keeps pulling her away from a product endorsement she's working on, it's almost impossible for Madison to get her mind off the Lakewood Abductor. Someone is abducting women in Night's neighborhood, and now the body of one of the missing women has turned up. Suspect #1? Madison's friend, Lieutenant Tex Allen. She knows someone is setting him up, and she's determined to do what she can to prove his innocence-- even though she risks putting herself right in the path of a killer.

Diane Vallere's Madison Night books continue to be my favorite cozy mystery series. Having read the fourth book first, I bought the first three and am happy to say that I'm all caught up and ready for book five, The Pajama Frame, which will be released at the end of February. These books have given me a new respect for Doris Day, the actress Madison Night models herself after. If that sounds too cute for words (along with the book covers), think again. Most people, if they are aware of Doris Day at all, think of the frothy romantic comedies she starred in with Rock Hudson, but there's much more to Doris than that. She was a trail blazer in her own right, and her movies run the full spectrum from musicals to Alfred Hitchcock. She portrayed an independent woman who didn't need anyone's protection, and if you think about it, she's the perfect role model for someone like Madison Night. (And I hope you've noticed that the book titles use Day's movies as inspiration.)

In With Vics You Get Eggroll, the spotlight is on Tex Allen, the other man in Madison's life. Yes, she's been dealing with one of fiction's favorite dilemmas for female characters: two men circling around her with bright eyes and hope in their hearts. We've already had a book focusing on Madison's contractor Hudson James, so now it's Tex's turn, and I have to admit that accusing someone of murder is a good way to find out what kind of person they are. Thus, in three books, Vallere solves Madison's man dilemma, and that's good news for readers like me who don't care for that particular plot device. (And no, the series doesn't weaken once Madison has made her choice.)

The mystery surrounding the Lakewood Abductor is very well-constructed and creates some lovely thrills and chills. My brain whispered to me whom the abductor had to be, but I ignored it, choosing instead to snuggle down and enjoy the book. One of the things I enjoy the most about this series is that this cast of characters is intelligent and caring-- and they don't do stupid things or run off half-cocked. Madison is forty-eight, has a bum knee, and knows she's not Wonder Woman. Throw in her adorable Shih Tzu named Rocky, and this series pretty much has it all-- including humor. In With Vics You Get Eggroll, there's a scene in which Tex vents his frustration out on an oak tree and gets taken to task by the elderly lady next-door. I loved it.

Strong mysteries, an excellent cast, chills, thrills and laughter, and an adorable dog... if you haven't read a Madison Night mystery, what are you waiting for?