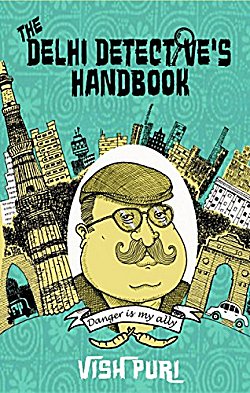 For anyone who's read Tarquin Hall's wonderful Vish Puri mystery series set in India, The Delhi Detective's Handbook is a must. And...if you haven't read one of these mysteries yet, reading the Handbook will encourage you to track them down. After all, it was Hall's indomitable private investigator, Vish Puri, who got me to try my first Indian curry, and now it's on the menu at least once a month. Of course, there's much more to the series than food. There's one of the best depictions of Indian culture and family life that I've read anywhere, plenty of humor, and some first-rate mysteries to solve.

In his handbook, Puri sets out to tell readers the reasons for his success. In between the sections of "Criminal Investigation in Ancient India" and "Crimes in Modern India," there are some eye-watering statistics on crime in that country. Hall (or should I say Puri?) always does an excellent job of giving readers an honest, well-rounded depiction of this amazing country.

Scattered throughout the book are obvious signs of a sense of humor-- a few dropped articles such as "a" and "the" which let you know that English is not Puri's first language. Vish also makes sure readers know that he is the author of the book by misspelling Tarquin's name each time it's used. Sections like how to choose the best disguises, the best places to procure snacks while on a stakeout, and how to properly groom your mustache not only made me laugh, they made me want to re-read all the books again. So I think I will, even though I know I'll be wanting a curry-- and hoping that there will be a new Vish Puri investigation for me to enjoy.