The Black Painting by Neil Olson 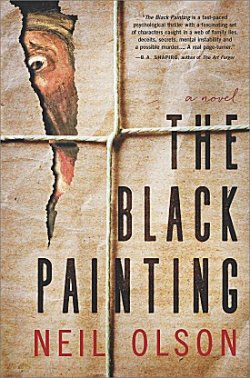 First Line: Last night she dreamed of the house on Owl's Point.

The house on Owl's Point has long been haunted by a painting rumored to cause madness and death. The self-portrait by the brilliant Spanish artist Francisco Goya was stolen years ago, and the Morse family patriarch has always been convinced that someone in the family was the thief. Now he's called the family together. Speculation is running high as to the reason for his summons, but the old man dies before the gathering is complete.

Now it's up to the youngest and most fragile of the Morse cousins, Teresa, to uncover the reasons behind her grandfather's death and the painting's theft, but she has no idea how many ugly family secrets she will be discovering along the way.

I've always been an easy mark for any book focusing on art theft and art history, so when I learned of The Black Painting, I had very high hopes. For the most part, those hopes were not realized. As much as the very first sentence tries to evoke Daphne du Maurier's superb Rebecca, it falls short. The entire cast reminded me of the motley crew of Gone Girl-- scarcely a one of them that I wanted to have anything to do with and none of them that I cared one tiny bit about. Self-absorption and greed ruled their lives. Yawn. Teresa is, by far, the best of the lot, but she's so ethereal she's like a bit of fog blown on and off screen. She's not enough of a presence to carry the narrative load.

Most of the time, this unlikable bunch of misfits prowled around the property like a pack of hyenas, their sole concern being the amount of money they inherit from their grandfather. The only time the book came to life was when Goya's fantastic Black Paintings became the focus. The first time I learned of their existence was when I took an art history class in college. Even as mere illustrations in a book, these paintings are so powerful that they've remained in my mind ever since. If only Olson's novel had one-tenth their power!