Lonely Vigil: Coastwatchers of the Solomons by Walter Lord 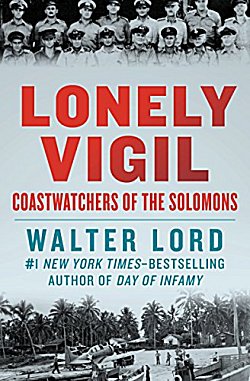 First Line: Six thousand miles southwest of San Francisco, just below the equator, lie the Solomon Islands, scene of perhaps the bitterest fighting ever waged by Americans at war.

The Solomon Islands experienced the bloodiest island combat of World War II, and it was here-- on islands like Guadalcanal-- that the Allies finally broke the back of the Japanese empire. Lonely Vigil tells the story of the coastwatchers, one group of men who kept watch behind enemy lines and provided the Allies with invaluable information.

This book would seem an unlikely choice for a woman of a certain age who's never seen one nanosecond of combat, but.... I read Walter Lord's A Night to Remember about the sinking of the Titanic, and I know how well he wrote non-fiction. I've also watched movies like South Pacific and In Harm's Way which touch lightly on the usefulness of the coastwatchers. Finally, my grandfather served in the US Navy in the South Pacific during World War II, and in reading military history about this time and place, I understand why he came home with nightmares.

Walter Lord's book shows why the Solomon Islands were crucial territory during the war, and the explanation of how the coastwatchers were formed and what these people went through is excellent. The coastwatchers' emblem was the peace-loving Ferdinand the Bull; they were supposed to observe and pass along information, they were not to fight. But this self-reliant group of independent thinkers knew that there are times when one has to think outside the box.

What these people went through runs the gamut of H's from hair-raising to humorous to heart-warming. Lord's non-fiction reads like fiction because he knew that what's important is people, not dates. Readers learn about a priest who was ordered to evacuate but managed to avoid leaving and of a nurse doing valuable work with the coastwatchers who couldn't escape her own evacuation orders. Readers learn about a young Navy lieutenant named John F. Kennedy and of the more than one hundred pilots the coastwatchers saved. And who could forget the submarine torpedo room turned into a nursery for evacuees and the ten-month-old baby who wouldn't stop crying unless he was being held by a burly bearded torpedoman named Phillips?

The coastwatchers worked among natives who could be friends one day and enemies the next. They had to remain hidden from Japanese soldiers who were constantly searching for them. They often had to move from one hiding place to another at very short notice, and they couldn't leave behind their radios (which weighed hundreds of pounds). Moving by stealth in thick, wet jungle and mountainous terrain-- often with injured pilots-- was brutal, exhausting work.

Lonely Vigil brings the work of these men to life. It's an important chapter in the history of World War II that will stay with me for a long, long time.