Scents and Sensibility by Spencer Quinn 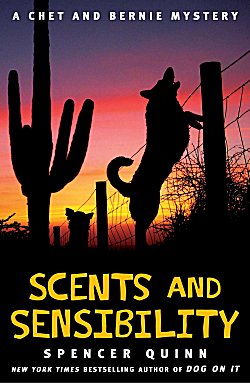 Chet and Bernie have just gotten home and discovered that the wall safe is missing. When they go next-door to talk with old Mr. Parsons, they find a saguaro in his front yard and a woman charging the elderly man with cactus smuggling. Since Mr. Parsons has a bad heart and is getting very agitated, Bernie talks the woman into letting him do a little investigating before she tries to throw the old man in jail. (And then there's the question of Special Investigator Ellie Newburg's pup named Shooter that's the spitting image of Chet....)

When Chet and Bernie go out in the desert to take a look around, they discover some bad things going on-- and they all seem to be connected to a desert festival called Cactus Man. They uncover leads that take them back to a long-ago kidnapping and a ruthless criminal who knows exactly how to exploit how Chet and Bernie feel about each other. And all because of a little cactus smuggling.

It's been a while since I last visited Chet and Bernie, and I'm not quite sure why. What I do know is that I was in the mood for some literary canine companionship, and no one speaks dog as fluently as Spencer Quinn. Even cat lovers would love these tales told from the point of view of Bernie's dog, Chet, who can only count to two because two is the best number.

Scents and Sensibility isn't all wagging tails and marking territory, however. Readers get to learn things like the laws involving the saguaro cactus here in Arizona and the tender way Bernie treats his elderly next-door neighbor (among many other things). The story is fast-paced and loaded with humor, danger, and even a tear or two. I don't know why I stayed away so long, but I know I won't be making that mistake again. Sorry, Chet!