Cradle to Grave by Aline Templeton 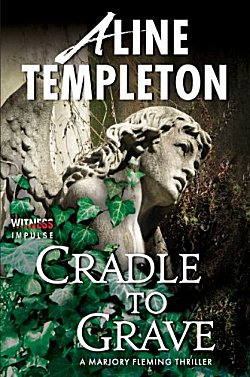 First Line: She had no idea how long she had been walking, though such light as there was had begun fading into an ominous twilight.

Nanny Lisa Stewart has been accused of murdering the baby in her care, and she steadfastly maintains her innocence. Found not guilty, she changes her name and her hair color and tries to find a place where she's not known, but the horrible threats always follow her. At her wit's end, she finally decides to "hide in plain sight"-- within a mile or two of her most persistent accuser. Is she an innocent victim or a calculating murderer? Detective Inspector Marjory Fleming, fresh back from a four-month suspension, will have a chance to find out when a murder occurs where Lisa has gone to ground.

When I saw that it had been over two years since I last read one of Aline Templeton's Marjory Fleming mysteries, I was ashamed of myself. "Big Marge" is one of my favorite characters in all of crime fiction, and Templeton not only knows how to create marvelous characters, she's equally skilled with plot and action. Before I go any further, I'm going to tell you right now-- if you like police procedural series set in the UK and you haven't read Aline Templeton, well... you need to correct the oversight as soon as possible. (And start with the first book, Cold in the Earth.)

Templeton's characters are real. Marge isn't perfect (which can be seen by her recent suspension), but she is a good police officer. Her marriage to a farmer is solid but not without its occasional problems, and her two teenage children alternate between being angels and demons, as all good teenagers do. Marge's righthand man, Tam MacNee, is an odd little man who observes all, voices strong opinions whenever he feels like it and is excessively proud of his Glaswegian heritage. But he's off his feed in Cradle to Grave, and one of the mysteries readers must solve is why. Added to the team is newcomer Detective Constable Kim Kershaw, who began working while Fleming was out and doesn't know quite what to expect from her new boss.

The synopsis of the book makes you think that there's only one mystery in Cradle to Grave, and that is quite misleading. There's a lot going on besides the innocence or guilt of Lisa Stewart. A music festival is scheduled to be held at Rosscarron House if the torrential rain ever lets up, and everyone who's gathered there-- including one of Marjory's old flames-- is up to something... including the eight-year-old boy. The trick is trying to figure out what each of them is doing, and that's amidst all the weather-related action, instances of sabotage, and one very scary killer wandering around the countryside.

Templeton's characters always feel so true and grounded in the here and now that it's a pleasure to immerse myself in their lives while trying to untangle all the threads of the mystery. I came very, very close to giving Cradle to Grave my highest rating, but in the end, I had to admit that there was a bit too much going on. Not to the point where I'd completely lost the plot, but there was a time or two when I'd read a character's name and ask myself, "Now, who's he when he's at home?" Except for that memorable eight-year-old boy....

Aline Templeton is a British author whom I believe should be much better known here in the United States. I can always rely on her to carry me away to Scotland in the midst of characters I love and plots that are a pleasure to unravel. I urge you to give her books a try.