A Season to Lie by Emily Littlejohn 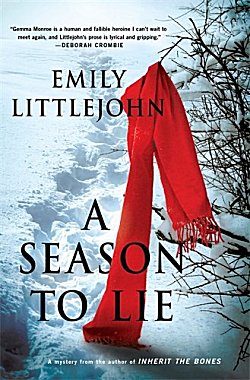 First Line: On a cold and bitter night in February, twelve weeks after giving birth, I returned to what I knew best: death.

It's just what new mother Gemma Monroe needs on her first day back on the job: there's a blizzard howling outside and the station has received a report of a prowler at Valley Academy. She and her partner, Finn, think it's a prank, but when they do a check of the school property, Gemma discovers a grisly scene out in the snow. The dead man's true identity was meant to be kept a secret, but no one at the Cedar Valley Police Department knows how long that will last. Besides, that's the least of their worries because an ominous note was left with the body promising more deaths to come.

Like the first book in the Gemma Monroe series, author Emily Littlejohn proves in A Season to Lie that she can create a premise for a mystery that will keep readers turning the pages. Unfortunately, the story as a whole fell a bit flat for me, and there were two main reasons for this.

One was Gemma's personal life. She's a brand-new mother who's finally come to terms with the fact that she is and that she enjoys being a mother. But somewhere between having to stop and use a breast pump every couple of hours and her partner whining about being stuck at home with a baby, I just wanted her to forget she had a personal life and concentrate on the investigation. Which leads to the second problem.

Gemma's investigation of the death of a famous man who was incognito there in Cedar Valley really had my interest until I deduced the identity of the killer by the description of the character and how everyone reacted to the person. From there on in, my interest deflated like a slow leak in a snow tire. I don't like it when this happens because it's not always a sign of my superior deductive skills. Sometimes it's simply a matter of my suspicious nature.

But by all means, your mileage can certainly vary, so don't be hesitant about giving A Season to Lie a try-- especially if you've read the first book in the series.