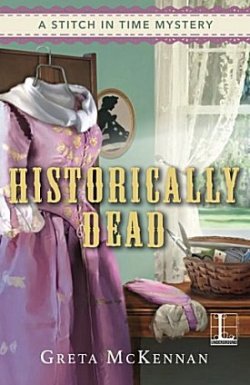 First Line: "What do you think? Do I look like an eighteenth-century lady?"

Seamstress Daria Dembrowski has landed an important job. The reality TV show My House in History has come to Laurel Springs, Pennsylvania, and two elderly sisters are on a mission to restore their colonial mansion to its original state. If the restoration is done right, the two could win a million dollars. Something like this means a lot of work for Daria, who specializes in historical textiles.

Daria loves the job although some of the folks on site are grumpy, but when Daria finds one of the researchers dead, the whole project could unravel-- and then the crimes begin to pile up.

Having grown up with a grandmother who was a whiz with needle and thread (and who made period clothes for her antique dolls), I'm happy to say that there was enough information on period sewing to keep me interested in Greta McKennan's Stitch in Time cozy series. Historically Dead is the second book, but I didn't feel as though I'd walked into the middle of a conversation, which is always a plus.

Daria is a talented and interesting main character who works amazingly well on very little sleep, doesn't own a car, and is in danger of wearing out the local bus system. She lives in an old Victorian house where she rents out rooms to her brother as well as to the lead singer of the Twisted Armpits-- a woman named Aileen whose food combinations should garner her a hit series on BARF TV.

McKennan has provided some excellent misdirection because I didn't have a clue about the identity of the killer, and I liked the resolution of the subplot involving a stolen Paul Revere platter. Where the book seriously stubbed its toe for me is with the entire My House in History scenario. It doesn't make sense. Untold amounts of money are being spent to remove decades (or centuries) of renovation to take the house back to its original appearance. This includes ripping out several fully grown Japanese maples and gutting the kitchen to put in a huge fireplace to cook the food... yet they didn't build an outhouse, tear out the laundry room, or erase the indoor bathrooms. This is a competition between several homeowners, so after spending all that money on the houses, the production company is going to turn around and pay the winner a million dollars? If that's true, there are hundreds of similar companies that would kill to have their advertising revenue.

If not for that particular stumbling block in which I could not persuade my disbelief to willingly keep suspending itself, I did enjoy the book. There's a good mystery in the pages of Historically Dead, and a very promising cast of characters.