Protected by the Shadows by Helene Tursten 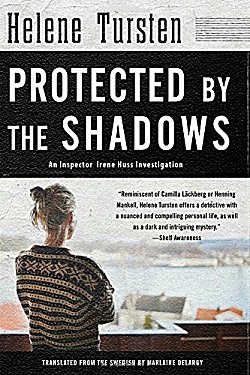 First Line: The delivery car moved slowly along Ringövägen as the driver spoke agitatedly on his cell phone.

Gang warfare is about to explode in Göteborg, Sweden. A member of a notorious biker gang has been burned alive. Anticipating a counterattack, Detective Inspector Irene Huss, her Violent Crimes Unit, and the Organized Crimes Unit band together to patrol a lavish party given by a rival gang, but that doesn't stop another murder from occurring practically right under their noses.

And when it rains, it pours. A bomb is planted under Irene's husband's car, and-- fearing for her family's safety-- Irene sends her husband and daughters into hiding and moves in with a colleague for the duration. She is not going to stop until the killers are behind bars and her family is safe, and it's not going to be an easy task. Not only does Irene have the feeling that she's being stalked, the gangs are always one step ahead of the police.

It's sad to see this series come to an end, but it certainly goes out on a strong note. Protected by the Shadows is filled with bodies, bombs, informants, and danger. Tursten keeps the level of suspense high from beginning to end. I was particularly happy to see that everything was handled intelligently. When Irene's family is forced into hiding, every detail is done the right way. Irene may be very frightened, but she keeps her head and keeps on working-- refusing to stop until the bad guys are caught and everyone is safe. It is such a treat to read a high-octane story like this and not witness any of the characters doing something stupid.

This series has been a favorite of mine from the first book, both for the investigations and for the characters and the insight into their daily lives. I will miss reading the new adventures of Irene Huss, but I have to admit that I'm wondering if Helene Tursten has something new up her sleeve.