The Question of the Absentee Father by E.J. Copperman & Jeff Cohen 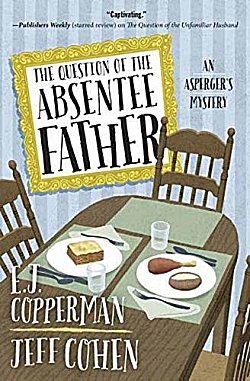 First Line: A letter arrived in the daily mail.

When Samuel Hoenig's mother receives a letter, she asks her son a question that he really doesn't want to hear: "Where is your father living now?" Samuel's father left when he was quite small, so Samuel has no feelings for him one way or the other, but when the business you run is called Questions Answered, he's duty bound to find the information his mother needs.

There's just one small problem. Samuel has Asperger's Syndrome, and the necessary flight to Los Angeles to find the answer to his mother's question takes him completely out of his comfort zone. Little does he and his associate Miss Washburn know, but the flight is the least of their worries. Once that plane lands, finding the answer to one simple question puts both of them in serious danger.

The Question of the Absentee Father continues one of my favorite mystery series. Not only is this book (and the series) a sensitive treatment of Asperger's, it actually allows me to see the world through Samuel's eyes and to have my brain become attuned to the way he thinks. Samuel is a nuanced character; readers learn his many abilities as well as his weaknesses, and in this latest book, we see how well he copes with being taken out of his comfort zone. His investigations also teach him things from book to book-- so he's doing better than many of the rest of us.

The cast of characters around Samuel is a wonderful support group for him. (We should all be so lucky.) His mother takes a backseat in this book, but her presence is still felt. Mike the taxi cab driver not only helps Samuel get from Point A to Point B, he can also be relied upon to help when needed. And what can I say about Miss Washburn? Two things, actually. One, it's a pleasure to watch the working and personal relationships between Samuel and his associate grow, and two, whatever you do--be careful with this woman's phone!

This entire series delivers strong characters, humor, enlightenment, and a fine mystery, and I recommend it highly. If the series is new to you, you can basically jump in anywhere, but for the sake of character development, I suggest you begin at the beginning with The Question of the Missing Head.