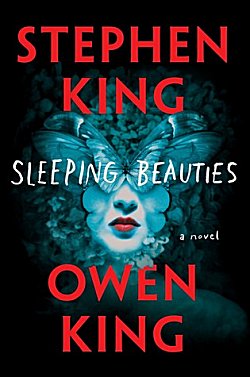 First Line: Ree asked Jeanette if she ever watched the square of light from the window.

The reports began coming out of Australia, and then it seemed, within the blink of an eye, it was all over the globe. Women were going to sleep and not waking up, a sticky white substance forming a cocoon around their bodies. It was very quickly learned that if those cocoons were disturbed in any way, the women would wake up and react with incredible violence.

In the women's correctional facility outside the small Appalachian town of Dooling, a mysterious woman calling herself "Eve Black" is immune to the sleeping disease. As knowledge of this woman makes its way outside the prison, the men find themselves dividing into two factions. One side believes she could be part of a cure and must be kept alive; the other believes she's a demon who must be killed.

"She was warned. She was given an explanation. Nevertheless, she persisted." As I read that quote in the very beginning pages of Sleeping Beauties, I wondered if Mitch McConnell ever thought he'd make an appearance in a bestselling novel. My next thought was that this particular quotation could mean a very political slant to the story. I was looking forward to finding out whether or not it did.

Most of the action in this novel takes place in a women's prison, which undoubtedly symbolizes how many women are confined to various sorts of prisons-- physical and otherwise-- around the world. Other than that, I did not find Sleeping Beauties to have some huge political agenda. What I did find was my dreaded "too much middle" that slowed down the story. I also found a cast of characters at the beginning that was long enough to choke a horse, but I didn't panic... and I didn't get the characters confused even though many of them appeared so briefly I wondered why they were mentioned in the first place.

There was a glimmer of brilliance from time to time, like a description of stupidity that made me laugh (and almost cry) in sympathy, or a scene in which we learn what happened to a teenage boy who decided to rape a cocooned elderly woman. But the characters-- even the ones I liked-- never really came to life for me, and that's one of the reasons why I love reading Stephen King's books. Add to that all those pages that could've been left out, and I found the middle third of the book tedious going.

The only thing that kept me going forward eagerly was wanting to know what happened to all those sleeping women. To say that I was disappointed in their final decision would be an understatement. But perhaps the Kings, father and son, wanted to see how many women would be disappointed? It's hard to say. What I will say, however, is that the collaboration between Stephen and Owen King was not a total success for me. Of course, your mileage may vary.