Fire in the Stars by Barbara Fradkin 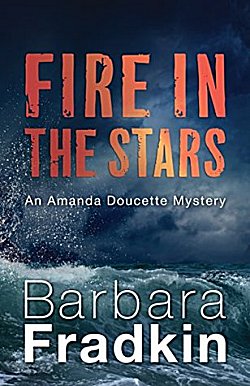 First Line: Amanda didn't begin to worry in earnest until a hint of land glimmered through the early morning fog.

After surviving horrific events in Nigeria, international aid worker Phil Cousins finds that he just can't settle to life back in his native Canada. Thinking that a camping trip in the wilds of Newfoundland will be just what he needs, he asks fellow aid worker Amanda Doucette to join him. But when Amanda and her dog Kaylee arrive at the agreed-upon meeting place, Phil isn't there.

Phone calls and questions lead Amanda to discover that Phil left his cell phone at home and took his young son Tyler with him. Both are missing, and Amanda is becoming frantic because all signs point to Phil suffering the effects of PTSD and depression. Teaming up with RCMP Corporal Chris Tymko, Amanda is in a race against time to find her friend and his son in the vast and forbidding wilderness of the Great Northern Peninsula.

I'm always interested in crime fiction that is set in places around the globe that I've never visited, and Barbara Fradkin's Fire in the Stars fulfilled this part of my mission beautifully. Without going into long, lyrical descriptions of the landscape, Fradkin still brought the Newfoundland wilderness to life-- both its mountains and its small fishing villages clinging to the edges of the sea. In fact, the Great Northern Peninsula of Newfoundland should be considered as a member of the cast of characters.

Speaking of characters, Amanda is the strong, beating heart of the story. Her work as a humanitarian aid worker has taken her all over the world, but her experiences in Nigeria were so horrible that she decided to return to her Canadian homeland. She travels by motorcycle, pulling a trailer that contains her camping gear and her Nova Scotia Duck Tolling Retriever named Kaylee. Amanda has her own problems with PTSD, and when the book begins, she throws herself into the search for Phil and Tyler to such a degree that she's infuriating-- even though readers know everything she does is done for all the right reasons.

But as the story continues, Amanda's behavior becomes quite admirable for Fire in the Stars is a mystery built on shifting sands. It begins as a missing persons case. This changes subtly when a man's body is hauled up in a fishing net, and then it becomes an all-out fight for survival. Fradkin does a superb job of jerking the rug out from under the reader. Just as I thought I had a grip on what was going on or who did what, Fradkin added another piece to the puzzle, everything shifted, and I found myself back at square one.

When I'm reading about a strong, intelligent woman who always tries to do the right thing, and this woman is in a superb natural setting with her best canine buddy, I love it when an author can keep me constantly reevaluating the evidence. Barbara Fradkin drew me right into the middle of her story and wouldn't let me leave. I certainly look forward to meeting Amanda again.