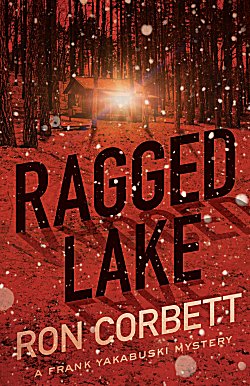 First Line: The cabin had been built by the headwaters of the Springfield River, not far from Five Mile Camp where the Cree who worked for O'Hearn Forest Products once lived.

A tree-marker makes a gruesome discovery in a squatter's cabin in a remote area on Canada's Northern Divide: an entire family has been murdered. Detective Frank Yakabuski, an army veteran who successfully led a task force that took down an infamous biker gang, is sent to solve the family's murder. He chooses Ragged Lake, an almost abandoned village as headquarters for himself and his two men.

No one in town wants to talk to him, so he rounds up everyone in a fishing lodge to wait out a bad storm, thinking that close proximity will force someone to talk while giving him the chance to investigate the area. In no time at all, Yakabuski is fighting to solve the crime, to stay alive, and to protect the innocents living there in the woods.

The strongest character in Ragged Lake is the bleak, remote, and frozen woods of the Northern Divide. The land has helped to shape the people living there into self-sufficient individuals who are used to doing for themselves and keeping what they know to themselves. The man sent to investigate the murders, Frank Yakabuski, is a big man who knows how to handle himself. After taking one look, very few people want to mess with him. As a lead investigator, I found him to be a bit inconsistent. Sometimes he wouldn't take risks because they were dangerous and unlikely to succeed, yet at others, he took equally dangerous risks that also had very little chance of success. I have to admit that I found it difficult to warm up to him or any of the other characters.

The pace of the book is a bit uneven, mainly due to some digressions that--although crucial to the plot-- could've been more smoothly introduced. The strongest parts of the book are the setting, which I mentioned earlier, and the mystery itself, which kept me guessing at motives throughout. However, the body count in Ragged Lake was much too high for my liking. If I'd known one major detail (which is left out of the synopsis), I probably would not have chosen to read the book.