Dangerous to Know by Renee Patrick 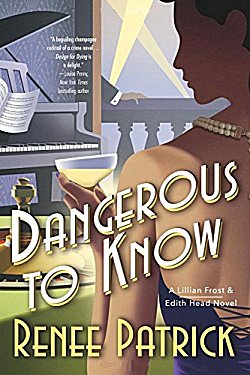 First Line: "The food was too rich, for one thing."

No longer a department store sales clerk, former aspiring actress Lillian Frost is adjusting to life as the social secretary to movie-mad millionaire Addison Rice. Costume designer Edith Head is running Paramount Pictures' wardrobe department, but only until those in charge find someone they think is better. When an international scandal hits the newspapers, the two friends find themselves working together once more.

Lillian attended the Manhattan dinner party in which a maid with Nazi sympathies divulged secrets that have all of New York society running for cover and two Paramount stars (Jack Benny and George Burns) facing smuggling charges. If that wasn't enough, Marlene Dietrich's pianist in her budding nightclub act has disappeared. Lillian reluctantly agrees to look for him. When Lillian finds him dead, Dietrich blames Nazi agents, and it's up to Lillian and Edith to uncover the truth.

Reading Renee Patrick's Lillian Frost and Edith Head mysteries is like walking into Old Hollywood; you never know who's going to have a cameo role. So much of the plot is based on actual events-- like Jack Benny and George Burns facing smuggling charges-- that readers get a real sense of life in the movie industry before the U.S. enters World War II.

For some reason, I'm having a difficult time warming to Lillian Frost, and I don't know why. I can certainly sympathize with what Edith Head had to endure-- being considered the cheapest alternative while the studio brought in a continuous round of prospective replacements. Edith is a good foil to Lillian and does provide the younger woman with sound advice. Frost's new job as social secretary helps give her the entrée into Hollywood society that she needs in order to conduct her investigations.

The writing team of Renee Patrick is adept at creating absorbing, complex mysteries that keep the pages turning. Anyone with even a minuscule interest in old Hollywood movies and stars should enjoy their Frost and Head mysteries. In fact, the books are so good that readers unfamiliar with the territory may find themselves becoming fans, too.