The Strange Disappearance of a Bollywood Star by Vaseem Khan 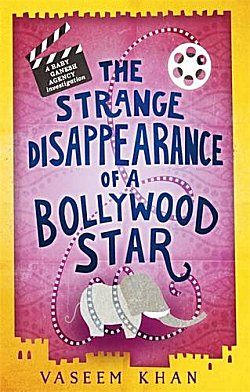 First Line: On a sultry March evening, in the great hive-city of Mumbai, Inspector Ashwin Chopra (Retd) was once again discovering the futility of reasoned discourse with his fellow countrymen.

The city of Mumbai loves extravaganzas and larger-than-life characters, which is fitting since it is home to Bollywood, India's film industry.

Private detective (and retired police inspector) Ashwin Chopra has been hired by film legend Bijli Verma to find her missing son, Vikram. Playboy Vikram is a rising star, and his disappearance has put the fate of his latest film in jeopardy.

Chopra takes the case, and when he and his sidekick, baby elephant Ganesha, begin to investigate, they find feuding movie stars, bad investments, and death threats. It would seem that there are a lot of people who want Vikram Verma out of the picture. Permanently.

The more Vaseem Khan's Baby Ganesh Agency mystery series develops, the more assured, complex, and enjoyable it becomes. The three books that have been published so far are doing a wonderful job filling the gap left by Tarquin Hall's excellent Vish Puri series. Khan has even begun featuring Indian cuisine via Chopra's restaurant, although I don't feel strong enough to try even the tiniest nibble of one of the chef's "Rocket Fuel pickles."

The Strange Disappearance of a Bollywood Star showcases culture, humor, strong characters, a hair-raising escape, and two separate investigations. While Chopra looks for the missing movie star, his associate Rangwalla is working on a case for a group of eunuchs. This investigation has a lot to teach readers (and Rangwalla) about this group of people in Indian society and how they're treated. It is a strong investigation in its own right.

Chopra's case is complex and sometimes frightening, and it's amazing how a baby elephant can actually have a part to play in all the action and not make the book seem ridiculous-- but Khan pulls it off with panache. He also shows us a bit of the history of Bollywood-- a film industry many times larger than the American Hollywood-- and fascinating tidbits like the relationship Indian families have with their jewelers.

Good story, good setting, good food, and the type of characters that bind all the pieces together. Rangwalla has a large part in the book, and we also see more of the relationship between Chopra and his wife Poppy. One of the things I enjoy most about these books is Khan's uncanny ability to describe a character in one (often hilarious) line. The film legend Bijli Verma is "a vision of immaculate fury in a sari," and Chopra's mother-in-law mans the restaurant's cash register "as though it were a gun turret."

I think I had a smile on my face the entire time I was reading The Strange Disappearance of a Bollywood Star. Give it a try. I'll bet you will, too.