The Language of Secrets by Ausma Zehanat Khan 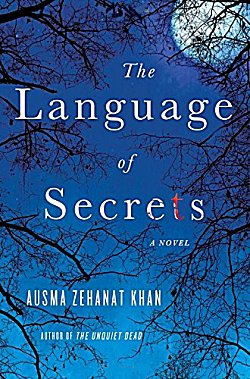 First Line: The snatch of poetry caught at Mohsin's thoughts, making a mockery of thousands of burnt-out stars flung wide against the banner of the sky.

When minority-sensitive cases come to the attention of any level of law enforcement, it's up to Detective Esa Khattak of Canada's Community Policing Section to take care of them. Since he is still under the microscope for the way his last case was handled, he's surprised when the national security team (INSET) calls him in on another politically sensitive case.

For months, INSET has been investigating a local terrorist cell which is planning an attack on New Year's Day. Their informant within the cell, Mohsin Dar, has been murdered at the cell's training camp just weeks before the planned attack. INSET wants Khattak to give the appearance of investigating Mohsin's death because they can't risk exposing their operation. But Mohsin used to be a close friend, and Esa knows that he's not going to be able merely to go through the motions. So Khattak sends his partner, Detective Rachel Getty, undercover into the mosque that houses the terrorist cell. As Rachel begins developing relationships with the people of the mosque and of the terrorist cell, the reasons for Mohsin's murder only seem to multiply-- and time is running out.

Ausma Zehanat Khan's The Unquiet Dead was one of the best books I read in 2016, so I was looking forward to reading the next book in her Rachel Getty and Esa Khattak series. The Language of Secrets is another splendid entry in the series which had me leaving my comfort zone and entering the world of terrorist cells.

It was clearer to me in reading this second book that Khattak has so many enemies within the police force that-- unless something happens soon-- it's going to be almost impossible for him to get anything done. The author also plays the differences between her two lead characters to perfection. Those who are familiar with the interpersonal relationships within Muslim families are going to understand Esa Khattak, while those who aren't are going to gravitate toward Rachel Getty. This is certainly true in my case because I find Khattak behaving as though he's the protector and savior of all those whom he cares for to get a little old. In real life, I might behave like his one rebellious sister who will purposely do the exact opposite of what he expects almost every single time.

There is an excellent rapport between the two leads. They are rapidly learning each other's strengths and weaknesses as well as how each will react in any given circumstance. Khattak is an old pro while Getty needs a lot more experience-- some of which she certainly gets while going undercover.

Although I had my suspicions about a certain character and thus wasn't completely surprised when all was revealed at the end, I did find parts of this absorbing book to be fascinating-- in particular, the ways terrorists try to avoid detection in their communications with each other. This problem of communication has meant that entirely new secret languages have been devised which can twist words of beauty into hatred and death.

After this second page-turner, I'm looking forward to seeing where Getty and Khattak go in the next book in this series. Khattak may annoy me from time to time, but I do like his very different perspective on things.