The Deepest Grave by Harry Bingham 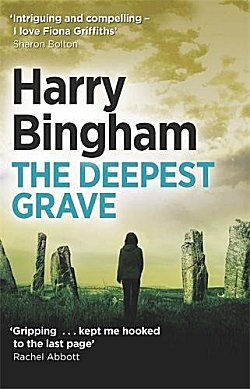 It's been over a year since Detective Sergeant Fiona Griffiths worked her last homicide. She keeps track. Finally, the call comes: a local archaeologist has been decapitated, a crime that seems to harken back to Dark Age Britain and King Arthur. Then armed burglars begin raiding remote country churches. Fiona thinks she has the answers to all the questions surrounding the murder and the thefts, but the end game has yet to be played. It's a crime so audacious that it will test even Fiona's uncanny abilities.

You'd be hard-pressed to come up with another crime solver as brilliantly unexpected as Fiona Griffiths. In many ways, her personality and abilities match the great Sherlock Holmes himself, so much so that her superior officers in the Cardiff police force soon learn that their major task is to learn when and how to "cry havoc and let slip" this dog of war-- because she is utterly ferocious on an investigation. She has the focus of a laser and simply does not know when to quit. One of the reasons why Harry Bingham's remarkable creation stays so dynamic is due to Cotard's Syndrome (a rare mental illness in which the affected person holds the delusional belief that they are already dead, they do not exist). Believe it or not, this gives her voice a freshness, an immediacy that's addictive.

In many of the mysteries I read, I may briefly mourn the dead person, but then it's time to move on and become part of the investigation. Not so in this series. Due to her unique outlook, they are never forgotten. Fiona brings the dead with her; they look over her shoulder to see if justice is being done. I find their presence very moving.

In The Deepest Grave, the author has written another wonderful, twisty mystery about the market for objets d'art. The book even features a showdown in which Fiona brings along Conscience and Violence as her two sidekicks. A fabulous main character and a wonderful story-- two things that I have come to expect from Harry Bingham. I am so glad that I found this series!