A Knit Before Dying by Sadie Hartwell 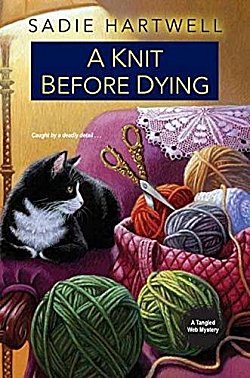 Josie Blair hasn't had time to worry about the life she had in New York City. Along with owning Miss Marple Knits, she's trying to jumpstart a blog, and she's managed to rent out the space next-door to Lyndon and Harry, who'll be opening an antique shop. But before she can formally welcome her new neighbors, Josie finds Lyndon stabbed to death on the floor of his shop. Police like his partner Harry for the murder, but Josie isn't so sure. Now she's got an investigation on her hands when she'd really rather be repurposing that box of vintage doilies Lyndon gave her or learning how to knit.

As someone who loves mysteries and knitting, the name of Josie Blair's shop, Miss Marple Knits, makes me smile. It is simply brilliant. By this second book, Sadie Hartwell's Tangled Web cozy series is shaping up nicely. Josie is funny and smart-- so smart that I can't quite figure out why she's having so much trouble learning how to knit. After all, if I can figure out those instructional videos on YouTube....

Anyway, there's a solid cast of secondary characters in A Knit Before Dying, and several of them have become Josie's good friends. For comic relief, there are two cantankerous, mule-headed old men in town-- one of them Josie's Uncle Eb-- who have been feuding with each other practically since they were in diapers. Now we get some background on the feud, and although the start to the feud is much as I'd guessed, it still made me scratch my head. Some of the things those two get up to do make for good comic relief, however!

There's also a complex mystery to enjoy, so if you're in the mood for good characters, crafting, a bit of humor, and a murder to solve, curl up with Sadie Hartwell's Tangled Web series. The first one is Yarned and Dangerous.